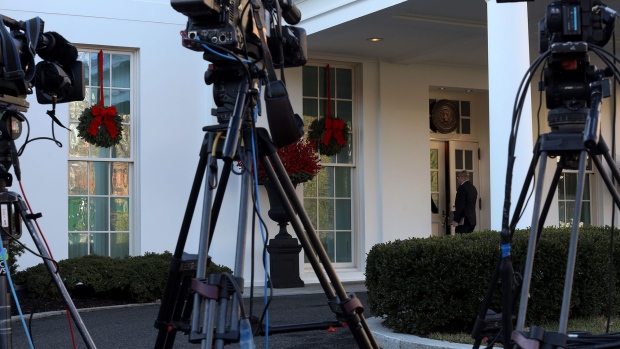 TV news cameras are set up outside the West Wing of the White House December 18, 2019 in Washington, D.C. , Photographer: Alex Wong/Getty Images

Deputy White House communications director Adam Kennedy, who was part of the administration’s rapid response efforts during the impeachment trial, is leaving his post for a job in the private sector, an official said.

Kennedy’s last day will be Friday, but he’ll remain on staff until the end of the month, the official added.

Kennedy wasn’t a familiar face on cable news networks but played a behind-the-scenes role for the administration, most notably during the Senate impeachment trial that resulted in the acquittal of President Donald Trump.

“Adam has been a key component of the president’s communication efforts since the beginning of the Administration, particularly running rapid response during impeachment, and will be greatly missed,” acting Chief of Staff Mick Mulvaney said in a statement.

Jared Kushner, Trump’s son-in-law and senior adviser, said in a statement to Bloomberg News that Kennedy was “a fantastic colleague” who was “instrumental in providing strategic communications to advance the president’s priorities.”

Kennedy is one of the few remaining original Trump White House staffers. He joined in 2017 for a role in the White House’s communications research arm. Before that, he was the deputy director of research for policy at the Republican National Committee.

His departure comes as Trump’s re-election campaign gets into full swing, and as the administration has faced criticism over its response to the coronavirus.