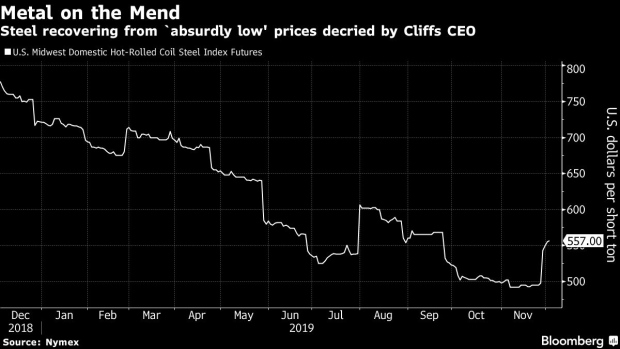 (Bloomberg) -- Cleveland-Cliffs Inc. shares headed for their steepest decline in three months after agreeing to buy AK Steel Holding Corp. for $1.1 billion in the biggest takeover of a U.S. steelmaker since Trump tariffs were imposed.

Cliffs shares tumbled 12%, wiping over $271 million from the market value of the top U.S. iron ore miner. The deal is “expensive” because it values AK Steel at 8.5 times next year’s estimated earnings before interest, taxes, depreciation and amortization, higher than its peers, according to David Gagliano, an analyst at BMO Capital Markets.

“Unfortunately Wall Street sells first and thinks later,” said Cliffs Chief Executive Officer Lourenco Goncalves, who will lead the combined group, said on a conference call with analysts. “We are going to create a company that will be the envy of the industry here in the U.S.”

While the deal enables Cliffs to expand into steelmaking by buying its second-biggest customer, it will also add to the miner’s debt pile and dilute its margins. The iron ore producer has obtained about $2 billion in financing commitment from Credit Suisse in connection with a new asset-backed loan and the refinancing of AK Steel’s 2023 senior secured notes.

Cliffs has an Ebitda margin of 15%, compared with AK Steel’s 8.1%, according to the companies’ joint presentation to analysts.

“We do not foresee a competing bid nor antitrust issues for the proposed CLF-AKS deal, but CLF may have some work ahead to win over shareholders,” Jefferies LLC analysts including Alan Spence said in a note, referring to the companies by their exchange ticker.

The Cleveland-based miner agreed to pay 0.4 of its own shares for each AK Steel share, the company said in a statement Tuesday. That ratio implies a consideration of $3.36 per share of AK Steel common stock and represents a 16% premium based on closing prices Monday, it said. Cliffs shareholders will own about 68% of the combined company.

The slump in Cliffs’ shares pushed down the value of the offer for AK Steel to $2.94 per share, lower than the steelmaker’s current stock price of $3.03.

The deal comes as prices of benchmark steel have shown signs of a recovery after dropping by about a third in the past year on concern over slowing economies. AK Steel’s market value has fallen by half since President Donald Trump announced the tariffs on steel imports in 2018 to protect the domestic industry.

In July, Goncalves said that “absurdly low” steel prices were temporary, and that he expected to see a rebound.

Cliffs gets about 23% of its revenue from AK Steel, making it the iron ore miner’s second-largest customer, behind ArcelorMittal SA, according to data compiled by Bloomberg.

“CEO Lourenco Goncalves’ track record of successfully executing turnarounds at Cliffs and Metals USA bodes well for the combination, though it’s possible the deal was done more to lock up a home for Cliffs’ future pellet offtake, while providing a lifeline to AK Steel.”

While Tuesday’s rally boosted the steelmaker’s market value to $956 million, it’s still down 46% since the tariffs were announced in early 2018.

The transaction is expected to close in the first half of 2020.

The cost to protect against default on AK Steel’s five-year senior debt plunged, according to data provider CMA.