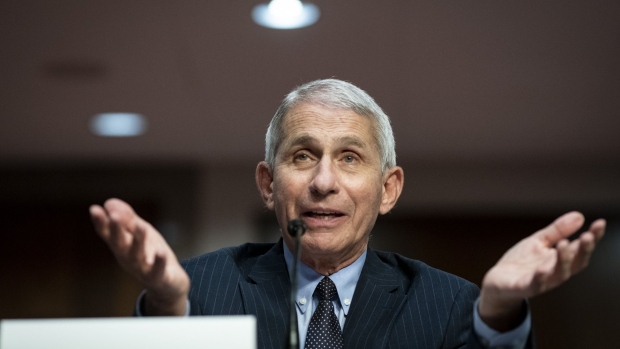 (Bloomberg) -- Trump administration officials are set to defend the federal government’s response to the coronavirus crisis at a Friday hearing hosted by a House panel calling for a national plan to contain the virus.

Top leaders from the National Institutes of Health, the Centers for Disease Control and Prevention and the U.S. Department of Health and Human Services plan to highlight public-health interventions, vaccine and therapeutic development work and the build-out of testing infrastructure, according to prepared testimony.

Officials including Robert Redfield, director of the CDC, and Anthony Fauci, director of the National Institute of Allergy and Infectious Diseases, will inventory measures taken to improve testing and develop therapeutics and vaccines, according to the testimony. But the prepared remarks don’t discuss what many health experts say is needed and the hearing is on: A national strategy to contain the coronavirus to replace the current state-by-state piecemeal effort.

Covid-19 “is the most significant public health challenge to face our nation in more than a century,” the officials said in a joint statement that was released by the committee.

The U.S. marked another grim milestone this week, with total fatalities from Covid-19 topping 150,000. More than four million Americans have been infected. A recent surge in cases in Sun Belt states has shown signs of moderating, though deaths have continued to rise, with Florida, Arizona and Texas posting records on Thursday.

President Donald Trump has defended his administration’s response and says the government is making progress. He said at a White House briefing on Thursday that “we know a great deal about the virus and how to treat it and who it targets.”

The closest the prepared remarks come to asserting a cohesive national strategy is on testing, where officials outlined a framework for diagnosing and mitigating disease. They acknowledged limitations in supply that have handicapped capacity in many parts of the country, but said “federal leadership has guided efforts to combat these challenges in close collaboration with states, local jurisdictions, and the private sector.”

Evidence of improving test capacity, however, is mixed. While one major laboratory said this week that turnaround times had improved, another said the average time to produce results for non-priority patients remained seven days, on average.

The hearing is likely to touch on other issues as well, including new risks posed by flu season.

“If there is Covid-19 and flu activity at the same time, this could place a tremendous burden on the health care system related to bed occupancy, laboratory testing needs, personal protective equipment and health care worker safety,” the testimony said, emphasizing the importance of getting a flu vaccine.

The testimony highlighted the NIAID’s work on vaccines, including its long collaboration with Moderna Inc. that led to the start of the first U.S. final-stage trial of a candidate on Monday. NIAID scientists have also helped with a variety of other vaccines, including one being developed by the University of Oxford and AstraZeneca Plc, according to the testimony.

“There is growing optimism that one or more of these vaccine candidates will prove safe and effective by late 2020 or early 2021,” according to the testimony.

The officials also plan to speak about data issues that have plagued the country’s response for months, according to the prepared remarks. States included more race and ethnicity data in their reports by late July, as compared with April, the officials said. The development comes in advance of a new HHS requirement for laboratories to submit these and other details by the start of August.

The Trump administration has faced escalating criticism about its use of data in the Covid-19 response. The officials were set to highlight modernization efforts on Friday.

“This crisis has highlighted the need to continue efforts to modernize the public health data systems that CDC and states rely on for accurate data,” the prepared remarks said. “Timely and accurate data are essential as CDC and the nation work to understand the impact of Covid-19 on all Americans.”