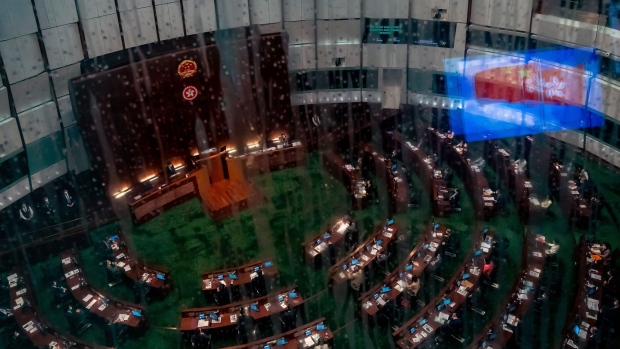 John Lee, Hong Kong's chief executive, during a Question and Answer session in the chamber of the Legislative Council in Hong Kong, China, on Wednesday, July 6, 2022. Hong Kong must not "lie flat" in its battle with Covid-19, Lee said, echoing mainland China's rejection of the "living with the virus" pandemic policy. , Bloomberg

(Bloomberg) -- The top US official in Hong Kong urged China not to further endanger the laws and values that helped the city develop, saying that the metropolis’s role as a business hub is quickly eroding under Beijing’s watch.

“Let Hong Kong be Hong Kong,” US Consul General Hanscom Smith said Wednesday at a virtual event hosted by the Center for Strategic and International Studies. Calling his overview a “grim accounting” of the city, he said that “it’s in no one’s interest, least of all China’s, for Hong Kong to become just another mainland city.”

Hong Kong has become one of several flash points in US-China ties, with the city’s current and recently-departed leader facing tough economic sanctions over enforcement of a national security law that critics say undermines the city’s legal and social norms.

Some of the world’s strictest Covid-19 policies, diminishing freedom of speech and the imprisonment of democracy advocates have also alarmed foreign businesses operating in Hong Kong, which historically has served as a key conduit between China’s growing economy and the wider world. Many have begun relocating staff to other cities including Singapore, Seoul and Tokyo.

Members of the business community echoed Smith’s concerns about the challenges posed by shifting legal norms as Beijing exercises greater control over Hong Kong, threatening the “one country, two systems” policy China’s government promised when it took control of the city 25 years ago.

“Hong Kong went from one of the best and easiest places to do business in the world -- and to live, no matter what country you are from in the world -- to now being a much riskier place and a place that’s much less connected,” said Tara Joseph, a former head of the American Chamber of Commerce in Hong Kong who is now senior director at Strategy Risks, which advises companies doing business in China.

Officials in Hong Kong and Beijing dispute that characterization, though they have signaled some acknowledgment that the turmoil of recent years has taken its toll.

In a rare visit last week, Chinese President Xi Jinping last week urged Hong Kong to shore up its economy after an era of “chaos” that included the outbreak of Covid-19 and pro-democracy protests that were reined in by implementation of the national security law and coronavirus restrictions.

The city’s new chief executive, John Lee, has vowed to sustain Hong Kong’s role as a business hub while criticizing democracy protests that peaked in 2019 as “unlawful.” Lee, who ran unopposed for the city’s top job, previously had a key role in enforcing the national security law.

Jessica Bartlett, the global head of financial crime legal at Barclays Plc., said businesses will find ways to adapt to the shifting legal and social environment -- including by relocating workers to other cities. But she said the vibrant business climate in the city will probably continue due to its relative advantages over other cities in the region.

Joseph, of Strategic Risks, also cautioned against the “notion of ‘the battle is lost and Hong Kong is done’ emanating from Washington,” saying that the city “remains an important place in setting an example for US policy in other parts of Asia beyond China.”