Support for hybrid work model growing, but choice to WFH still seen as a perk: Professor

As Manhattan slowly springs to life again, with Wall Street’s biggest firms pushing traders and bankers back into the office, the scene some 350 miles to the northwest, where North America’s No. 2 financial center lies, is vastly different.

Toronto’s Bay Street is quiet, laid low by successive waves of COVID-19. Union Station, normally one of the continent’s busiest commuter hubs, is largely deserted, even in rush hour. It will get busier as the crisis eases but the financial district, most here agree, has undergone a change that is likely permanent.

Unlike on Wall Street, where the likes of JPMorgan Chase & Co.’s Jamie Dimon and Goldman Sachs Group Inc’s David Solomon talk excitedly about filling offices back up, top Bay Street executives seem to be in no hurry to end remote work. If anything, they rave about how surprisingly efficient and profitable the arrangement has been. And some acknowledge that their employees have little desire to return to the office five days a week.

In one recent comment that captured the mindset in C-suites across the city, James O’Sullivan, the head of fund manager IGM Financial Inc., spoke of a “new normal” where many employees spend part of their workweek at home. Manulife Financial Corp. Chief Executive Officer Roy Gori says remote work has been “incredibly” effective and the global insurer will continue to allow some of it when the pandemic is over.

This approach is driven, in part, by real estate. Toronto has one of the lowest vacancy rates for top-quality commercial office space among North America’s major cities, according to Cushman & Wakefield Plc data, with banks, asset managers, insurance companies, technology firms and government agencies all competing for it. A smaller in-office workforce will help keep these costs in check as companies grow.

But the kinder, softer sell in getting employees back is also about the structure of Canada’s financial industry, where mortgages, lending and asset management drive the bottom line. Dealmaking and trading -- lines of business where the need for collaboration has created a culture of long hours in the office -- are important, but they’re not the dominant part of the country’s banks.

That shows up at the top. Of the five CEOs who run Toronto’s largest banks, only one has spent the bulk of his career as an investment banker. 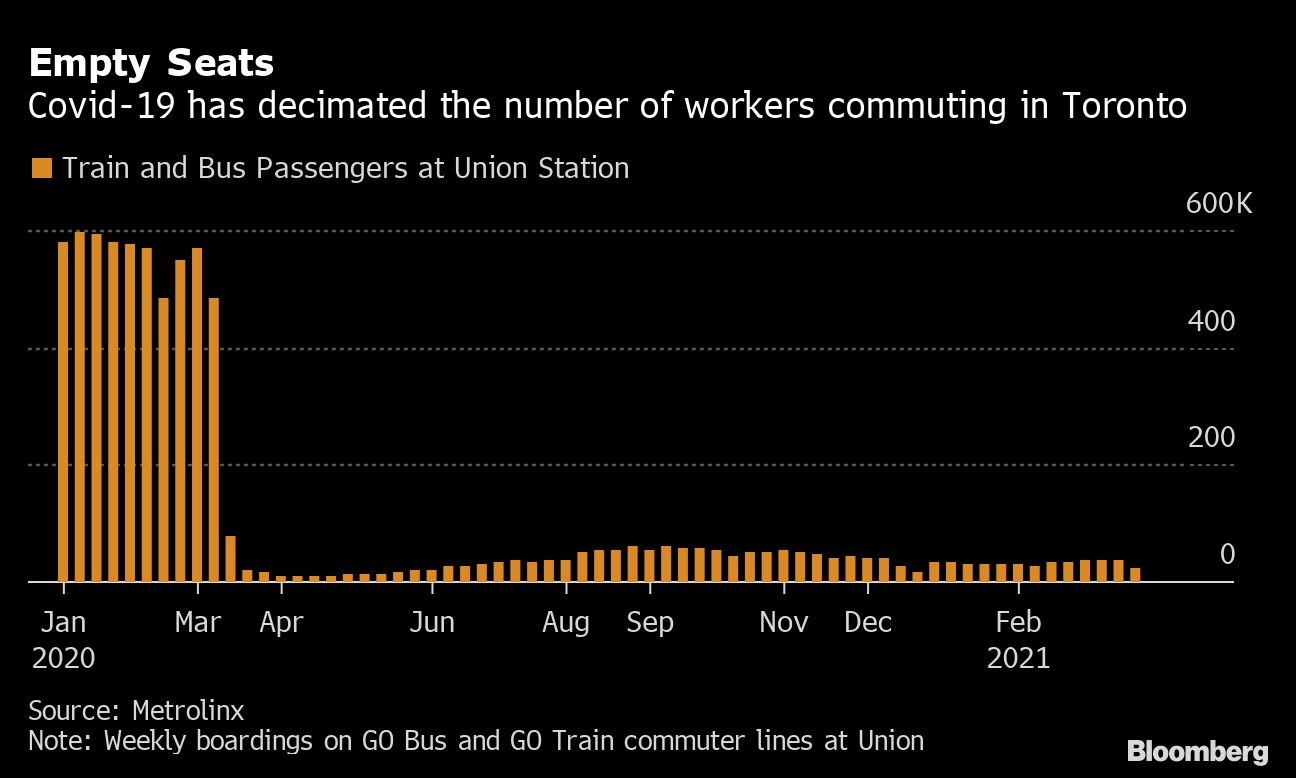 Of course, not all firms in the two cities fit this neat-and-easy breakdown: Citigroup Inc., for instance, is embracing a hybrid work model more akin to the Canadian approach. And bank executives in Toronto may eventually decide they need more people in the office. But, broadly speaking, there’s a divergence that may shape how these industries, and their cities, develop and evolve in coming years.

At the Toronto Stock Exchange, the nerve center of Canadian finance, many employees won’t be coming back five days a week. After running with as little as 4 per cent of its staff on site during the pandemic, the exchange plans to adopt a new work model, as technology and automation have allowed those running even “critical” infrastructure to work from home, according to John McKenzie, CEO of exchange parent TMX Group Ltd.

The pandemic is even changing the minds of finance executives who are true believers in the camaraderie of office life.

Before the pandemic, Jeff Macoun, president and chief operating officer of Canada Life Assurance Co.’s domestic unit, loved to stroll around the office and chat with colleagues about their weekends and their kids’ hockey games. He’s been working alone in an empty wing of the insurer’s office in London, Ontario, while 95 per cent of the employees are working from home.

But the numbers don’t lie. The firm,which is controlled by Power Corp. of Canada, found that employee engagement scores actually went up during the pandemic, with an 86 per cent positive rate during a survey conducted in the fall, up from 73 per cent a year earlier.

While Macoun misses the personal interaction, remote work has been “liberating” for many of his 11,000 staff, he said. “It has shown me that we have the ability to service our customers in a more digital way.”

At Canaccord Genuity Group Inc., one of Bay Street’s shrinking roster of independent investment banks, the trading unit has generated more than three times the revenue it did a year earlier, with as few as 10 per cent of its traders present in the office.

“Until we were forced to have to do it, senior management and guys in their 50s like me thought you had to come to the trading desk to get your job done,” Darren Hunter, Canaccord’s global head of Canadian equity trading, said in an interview. “But we had to change, so we made it work. And it worked way better than expected.”

Hunter and many of his colleagues still miss the clamor of 30 people talking at once and the ability to spontaneously break away in a smaller group to brainstorm an idea. Even after his traders return to the office, he expects them to have more flexibility than they had before the pandemic and that will help productivity. “They’re going to work harder and generate more revenue,” Hunter said.

But working from home isn’t without its downsides, especially for the merchants, restaurants and service workers whose livelihoods rely on the daily flood of downtown commuters.

That’s a matter of some concern for officials in the Toronto region, which has an estimated 275,000 financial services jobs, and in Montreal, Canada’s second city of finance and home to National Bank of Canada and global investment manager Fiera Capital Corp.

Among those firms expecting to cut the number of leases is Quebec’s Desjardins Group, the largest financial co-operative in North America. About 95 per cent of employees at its downtown office complex are working from home, spokeswoman Chantal Corbeil said in an email.

Cost-cutting opportunities abound. “The technology clearly has worked over the past 12 to 15 months in COVID,” said Tayfun Tuzun, Bank of Montreal’s chief financial officer. “We may utilize some of that and create more flexible work environments, which could potentially have an impact on our total real estate cost.” The bank spent more than C$1 billion last year on rents, furniture, fixtures and property taxes. 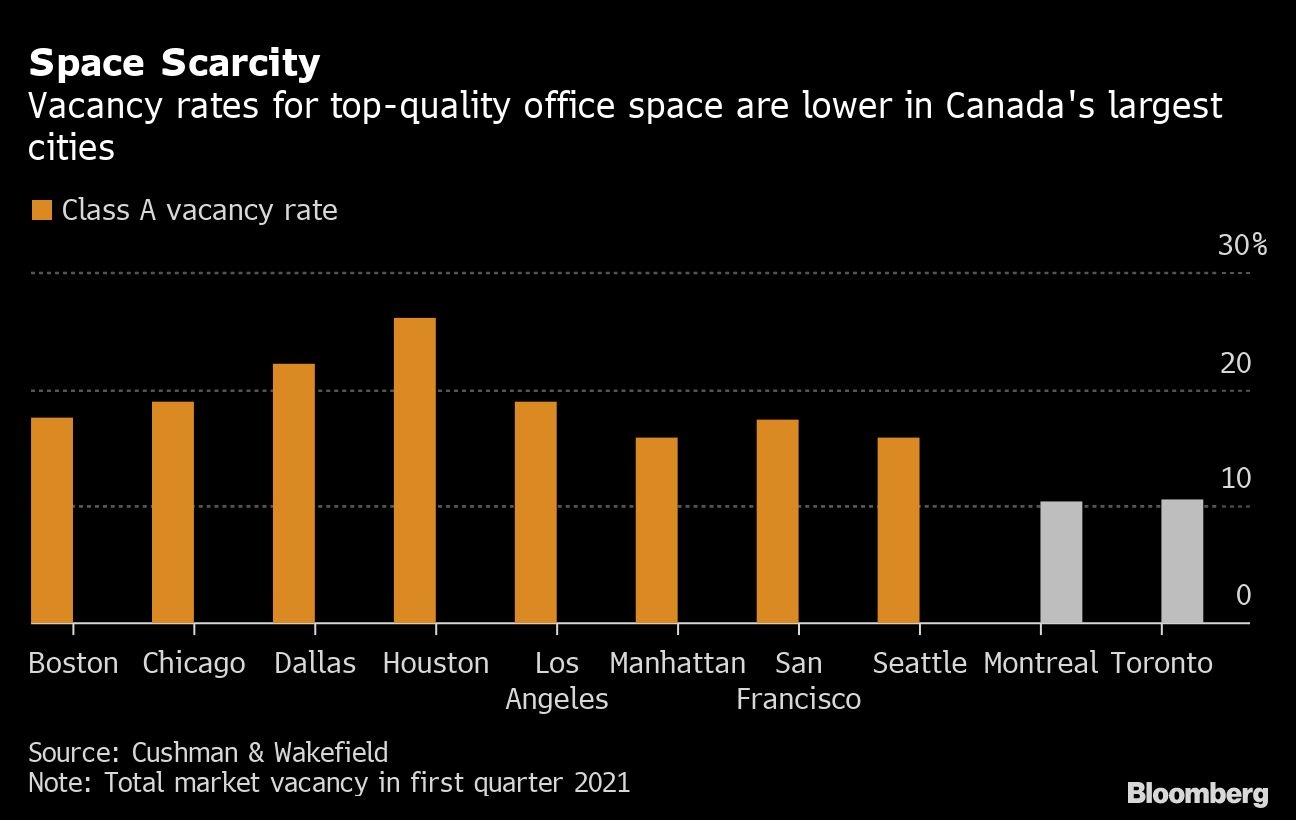 Fiera, which manages about $140 billion, conducted an internal survey that found 86 per cent of its employees want to work from home at least two days a week, Global Chief Human Resources Officer Lyne Lamothe said. “Our people wanted that flexibility, and I think there’s no going around it. We will need to adapt,” she said.

The trend so worries local officials that the Quebec government earmarked C$23.5 million for the downtown economy, some of which is going toward an “I love working downtown” campaign.

The plans include outdoor meeting areas, concierge services to help workers get errands done, and arts installations. Michel Leblanc, president of the city’s chamber of commerce, knows it will be tough: “You’re going to have to charm workers for them to return.” And their bosses in the C-suites.