September data from the Toronto Regional Real Estate Board and research firm Urbanation Inc. show a surge of units for sale, the beginning of a weakening trend for condos, along with a sharp decline in rents. That’s in spite of a boom in other segments such as single-family homes in Canada’s financial capital.

Active listings of condos in downtown Toronto hit a record at the end of September and were 215 per cent higher than a year earlier, according to Urbanation data. That compares with just a 5.3 per cent rise in total housing listings across the city during the month, according to TRREB data released Tuesday.

The trend means condo prices in October will likely fall on an annual basis, Urbanation President Shaun Hildebrand said. “Demand is just not keeping up with new supply right now,” he said.

The weakness suggests the rosy picture for real estate that emerged over the past few months may be overstated in a city that UBS Group AG says is among the world’s most vulnerable to a “sharp correction.”

Across the Toronto region, owners listed 6,480 condos for sale in September, up from 5,599 in August and 3,403 in the same month a year earlier, TRREB reported Tuesday. With sales not keeping up, benchmark prices fell for a second straight month and are down 1.8 per cent since May, even as values for detached homes have surged over that time. 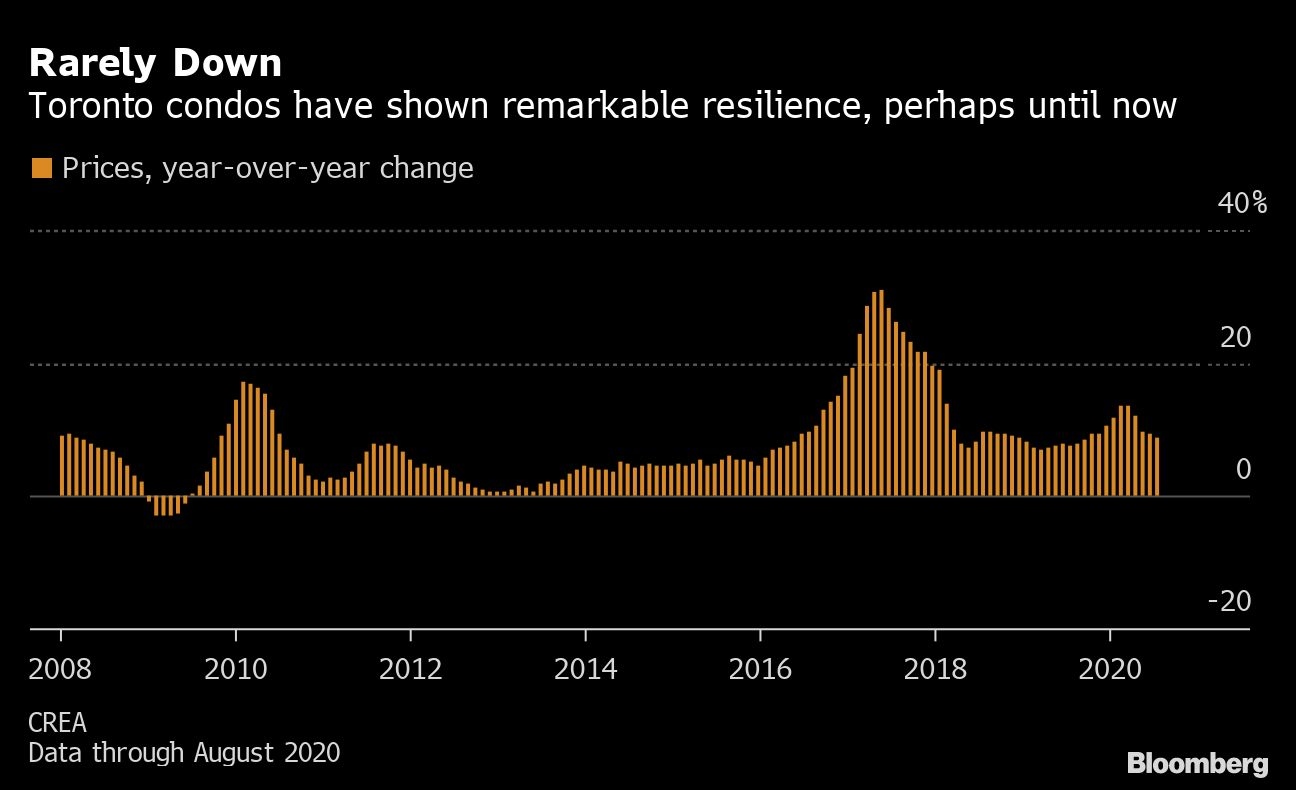 The decline in rents has been more dramatic, with the cost of leasing unfurnished units in the Greater Toronto Area down 11 per cent from a year earlier in September, according to Urbanation. That’s the biggest year-over-year decline on record.

Lackluster demand for condos is beginning to act as a drag on the overall Toronto housing market, with total home sales falling on a seasonally adjusted basis in September for the first time in five months.

According to real estate professionals, the weakness is concentrated in the downtown core. A glut of units began to form after the pandemic halted immigration and people left the city center in search of more living space to work from home. At the same time, a flurry of new condo completions and a raft of Airbnb operators shifting to longer-term rentals has added to the inventory.

The ratio of sales to new listings for condos in downtown Toronto fell to 24 per cent in September, the lowest level since the early 1990s, Hildebrand said.

In the core, average rents were down 14.5 per cent in the third quarter on average from the same period last year, Urbanation data show.

“It’s simply because of all the new construction completions and absolutely no new blood of tenants coming in,” said Simeon Papailias, co-founder of the Real Estate Center, a management company. “We’re going to see people move to get cheaper rents.”

Rental units are sitting longer on the market -- 26 days in August, compared with 14 a year earlier -- and the sales-to-new listings ratio for downtown condos has been below 40 per cent, the threshold between a balanced and a buyer’s market, for the past several months, Hildebrand said.

“It’s crazy slow,” Beth O’Donoghue, a broker at Brad J Lamb Realty in Toronto, said by phone. “So much is on the rental market and it’s inevitably trickling down to the retail market.”

O’Donoghue says it’s not panicked selling, but rather “people who have owned units for a long time. They’ve already made so much money.”

Average condo resale prices remain above year-earlier levels, but analysts believe more declines are coming in the next few months. Right now, some investors are dumping their units below market value just to sell immediately.

Owners are dropping their prices by as much as $20,000 relative to comparable units to lure buyers, according to John Pasalis, founder of Realosophy, a Toronto brokerage.

“People are pricing units below what they would have gotten even two months ago,” he said. 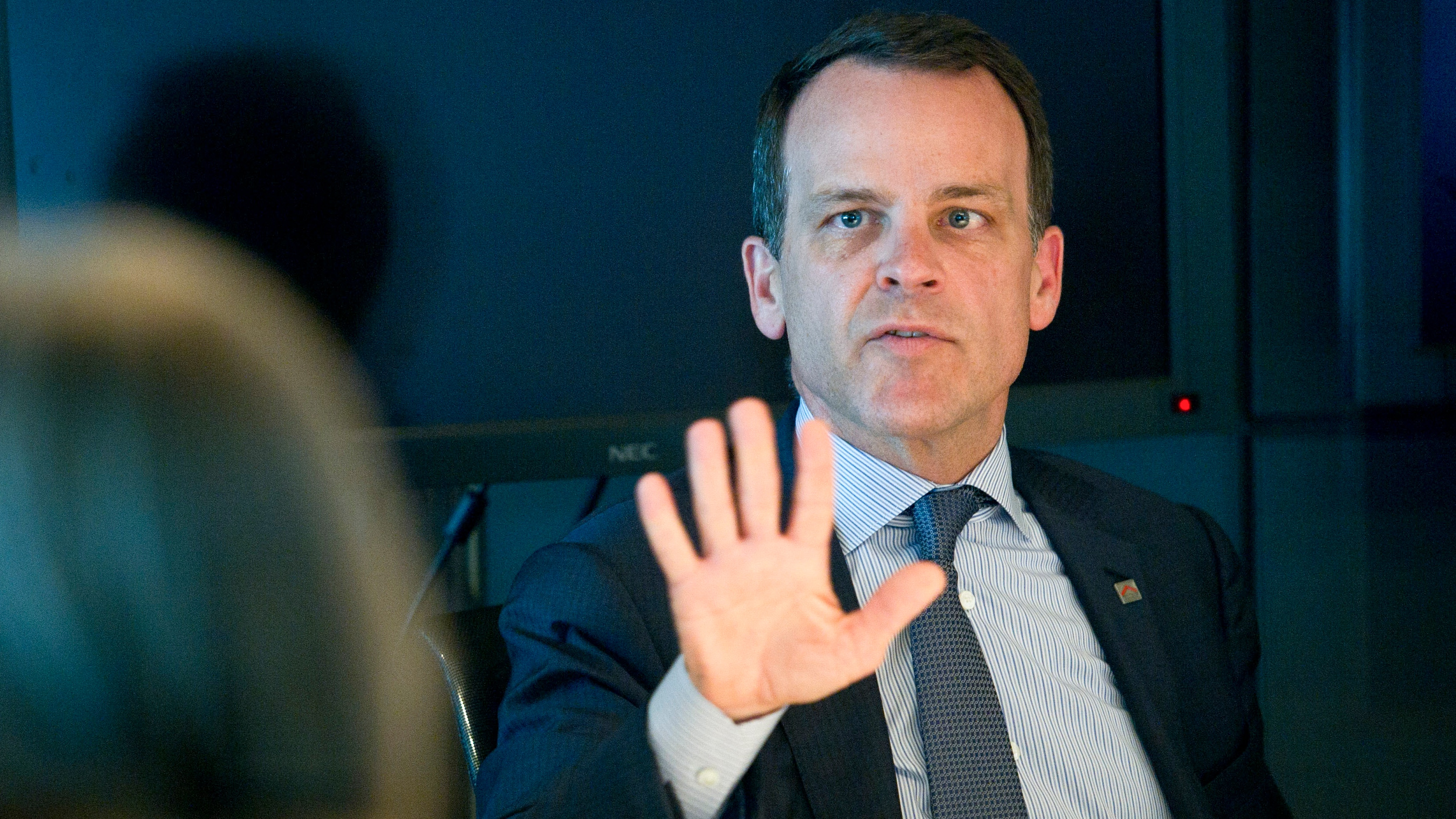