Houses are shown under construction in Toronto on Friday, June 26, 2015. , The Canadian Press

The Toronto Real Estate Board said 9,768 homes changed hands in October, marking an 11.5-per-cent gain compared with the same month last year, according to data released on Thursday. The sales growth came despite new rules announced by Finance Minister Bill Morneau on Oct. 3 that are designed to take some risk out of the market, including new mortgage stress test requirements that took effect midway through the month.

There was some relief on the inventory front in Toronto last month, albeit by the slimmest of margins. New listings rose 0.9 per cent in the month; however, total active listings plunged 34.7 per cent from the previous year.

The annualized drop in inventory, combined with the surge in sales, helped drive up the average selling price 21.1 per cent to $762,975. The hottest activity wasn’t even in the city core: the average price of a detached home in the surrounding 905 region (which includes cities such as Mississauga, Oakvile and Hamilton) jumped 29.4 per cent to $948,191.

“As we move through November and December, we will be watching the sales and listings trends closely, in light of the recent policy changes announced by the federal minister of finance. TREB will once again be conducting consumer survey work, in order to report on home buying intentions for 2017,” said TREB President Larry Cerqua in a statement.

The trends in Toronto stand in stark contrast to the state of Vancouver’s housing market. The Real Estate Board of Greater Vancouver revealed on Wednesday that home sales across the region plummeted 38.8 per cent in October.  The downturn was even more pronounced for detached properties, with sales in that segment plunging 54.6 per cent to 1,437 units in the month.

A breakdown in Toronto home prices in October: 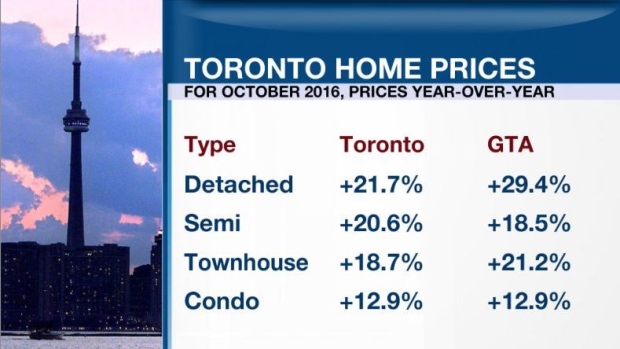 Here's a breakdown of Toronto home sales activity in October: 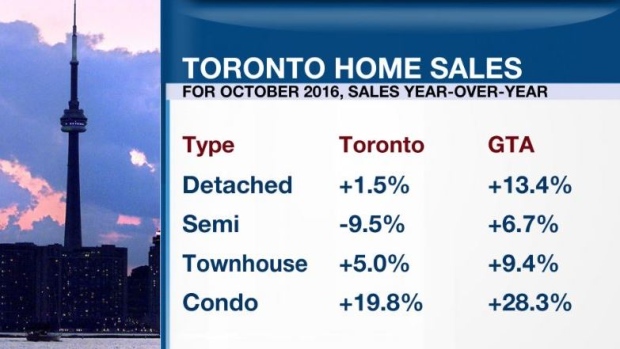