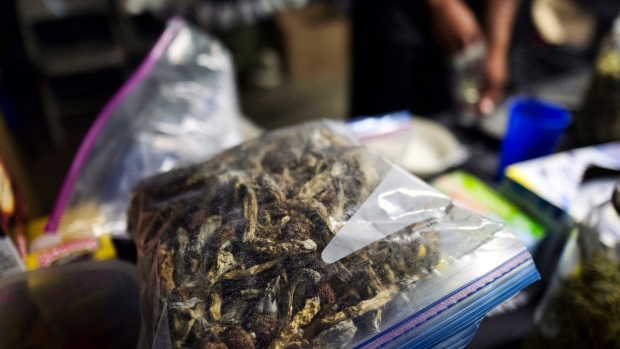 A vendor bags psilocybin mushrooms at a pop-up cannabis market in Los Angeles on Monday, May 6, 2019. , (AP Photo/Richard Vogel)

"The mental health options that we have today are broken," said Mujeeb Jafferi, Field Trip's president, in an interview with BNN Bloomberg at the company’s downtown Toronto offices. "This is something that provides an alternative to traditional anti-depressants which may not have worked for some people."

The company, whose founders include several former Aurora Cannabis Inc. senior executives, will begin construction on a 3,000 square-foot research lab this month in the University of the West Indies in Jamaica, where psilocybin-producing mushrooms are legal, said Jafferi.

Financial terms of the deal were not disclosed, but Jafferi said the university will assist with providing the company research staff and academic advisors.

Field Trip’s work in exploring how psychedelics – which include psilocybin, ketamine, and MDMA – can be used to treat anxiety or depression comes amid growing public sentiment toward the drugs.

In the past year, several U.S. cities such as Oakland and Denver have decriminalized psychedelics, while former Canopy Growth Corp. co-chief executive Bruce Linton announced plans to become a director at Mind Medicine, Inc., another Toronto-based company looking to establish safe psychedelic-assisted treatments for mental illnesses.

Those drugs remain classified as illegal Schedule 1 controlled substances in the U.S., although proponents of psychedelics believe focusing on medical treatments could see the narcotics follow a similar path that led to the legalization of cannabis in Canada.

Field Trip's Jafferi believes the Jamaican research lab could provide a better understanding of how some of the 180-odd mushrooms known to contain mind-altering molecules work as it aims to enter them into clinical trials.

"One of the goals is to build a library of psychoactive fungi and developing scalable commercialization options," said Jafferi. "We know of a few alkaloids based in these mushrooms but there's a lot we don't know yet."

Aside from developing its research lab, Field Trip also plans to open a series of clinics in Toronto, New York, London and Los Angeles where doctors will be able to prescribe ketamine and monitor patients seeking mental health treatment, Jafferi said.

He added that unlike cannabis, which can be used as medicine in an "as-needed" basis, there is already documented research from the 1970s that suggest psychedelics are an effective treatment for mental health when they are prescribed in a controlled and safe setting.

"It's not that far out for us to see doctors prescribing some psychedelics for a particular mental health disorder," Jafferi said.