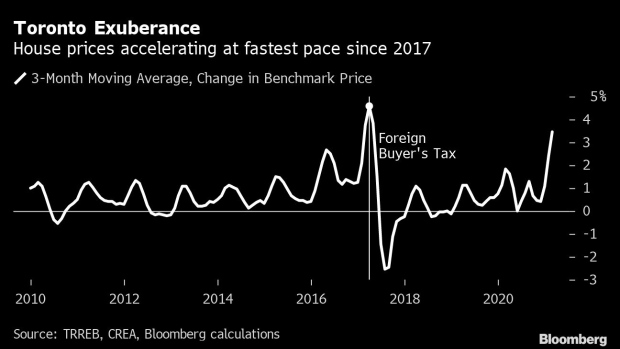 A "Sold" sign in front of a home in the Midtown neighborhood of Toronto, Ontario, Canada, on Thursday, March 11, 2021. The buying, selling and building of homes in Canada takes up a larger share of the economy than it does in any other developed country in the world, according to the Bank of International Settlements, and also soaks up a larger share of investment capital than in any of Canada’s peers. , Bloomberg

(Bloomberg) -- Toronto home values continued to swell in March, bringing annual average price gains to more than 20% and adding fuel to a raging debate about whether policy makers should try to cool the market.

New listings were up 57% from March 2020, when the onset of the pandemic temporarily caused a freeze in real estate activity. But the new supply was not able to keep up with demand spurred by low borrowing costs and demand for bigger homes, especially in the suburbs, a report from the Toronto Regional Real Estate Board said Tuesday.

“The potential for double-digit price growth could continue without a meaningful increase in the supply of homes available for sale,” Jason Mercer, the Toronto real estate board’s chief market analyst, said in a news release. “This will become more apparent as population growth resumes over the next year.”

Cheap mortgages and new remote-working conditions have spurred a frenzy for more spacious homes, with house hunters bidding up prices in Canada’s largest cities and then looking further afield when they’re priced out. The resumption of more normal levels of immigration, which was slowed by the pandemic in 2020, is another source of demand.

The rapid price appreciation has spurred a debate among prominent economists at Canada’s largest banks over whether Prime Minister Justin Trudeau’s government or other policy makers should step in.

The chief economist of Bank of Nova Scotia, Canada’s third largest lender, said policy makers should not rush to act because price gains are being driven by a lack of homes for sale. Many sellers were sidelined by the pandemic last year, but that problem could take care of itself as the traditional spring selling season gets underway, Jean-Francois Perrault said in a report released Sunday.

That came after Toronto-Dominion Bank’s top executive, Bharat Masrani, told Bloomberg that governments should be cautious in taking action. Meanwhile, economists at Royal Bank of Canada and Bank of Montreal are calling for more urgent action to keep prices from becoming completely unaffordable for first-time buyers and head off the possibility of a destabilizing crash later.

Policy makers so far have not signaled plans to take action, but some have expressed concern. Canada Mortgage & Housing Corp., a federal agency that monitors the market, last month raised its assessment of Toronto’s vulnerability to a sudden drop in prices to high, citing the rapid climb in prices. There are five markets in Canada with that designation.

Read more: Housing Boom That Never Ends Has Wiped Out All Short-Sellers

Toronto’s benchmark price index, a measure that takes into account the mix of types of properties sold, has posted a 10.8% gain in the first three months of 2021, the fastest period of appreciation the city has seen since since early 2017. Back then, the Ontario government stepped in with a number of measures, including a tax on foreign buyers.