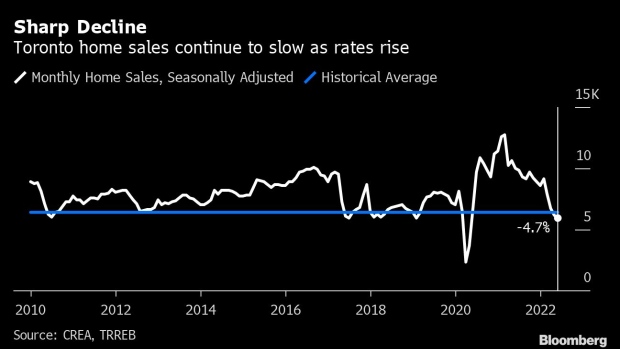 Homes in the St. Andrew-Windfields neighbourhood of Toronto, Ontario, Canada, on Monday, Dec. 6, 2021. The roots of Canada's housing dysfunction lie in provincial and city governments that don't have a strategy for dealing with the immigrant influx and are all too easily swayed by residents' groups opposing greater density. , Bloomberg

The average price of a home in the country’s largest city fell 3% in June to C$1.14 million (about $875,000) on a seasonally-adjusted basis, bringing the total decline to more than 11% since February, according to data released Wednesday by the Toronto Regional Real Estate Board.

Fewer than 6,500 homes were sold during the month, down nearly 5% from the previous month -- and 41% lower than a year ago. The number of homes listed for sale has soared.

This abrupt slide in Toronto’s housing market has coincided with the Bank of Canada embarking on one of the most aggressive efforts to raise borrowing costs in the institution’s history. To get inflation under control, Governor Tiff Macklem has raised the benchmark rate from 0.25% to 1.5% since March, and traders are betting the central bank will lift it to 2.25% next week.

“Home sales have been impacted by both the affordability challenge presented by mortgage-rate hikes and the psychological effect wherein home buyers who can afford higher borrowing costs have put their decision on hold to see where home prices end up,” Kevin Crigger, the Toronto real estate board president, said in a statement accompanying the data. “Expect current market conditions to remain in place during the slower summer months.”

With buyers fleeing the market while new listings continue apace, properties are starting to pile up. The number of homes for sale in Toronto soared 43% in June from the same month last year, to more than 16,000, while properties are now staying on the market an average of seven days longer, the report shows.

As the epicenter of a national housing boom that saw benchmark prices rise more than 50% in two years, Toronto and its surrounding communities have now found themselves leading on the way down, too. Prices declined first in southern Ontario and so far have fallen further than in other regions of Canada.