The average selling price across the Greater Toronto Area in August was $732,292. That was three per cent above year-ago levels, but 20.5 per cent below the April high of $920,791. A price decline of 20 per cent from a peak is commonly referred to as a bear market.

It marked the fourth straight month of sequential price declines as would-be buyers moved to the sidelines waiting to see how the provincial government's so-called Fair Housing Plan, built on taxing foreign speculators and 15 other measures, would shake out.

Indeed, there was no rush off the sidelines as sales tumbled 34.8 per cent year-over-year in August with 6,357 homes changing hands.

As usual, the headline sales decline and price erosion masks underlying trends. Notably, the average price for a condo in the Greater Toronto Area soared 21.4 per cent year-over-year in August to $507,841.

“We’re seeing a lot of investors in the condo market because it’s still booming, said Realosophy President John Pasalis in an interview with BNN on Wednesday. “But, definitely, people are not buying single-family homes now expecting prices to go up 20 per cent year-over-year.”

While there was a hint of relief on the inventory front as new listings slipped almost seven per cent from a year earlier, total active listings of properties available for sales was still 65 per cent above year-ago levels.

“The relationship between sales and listings in the marketplace today suggests a balanced market,” said Toronto Real Estate Board Director of Market Analysis Jason Mercer in a release.

“If some buyers move from the sidelines back into the marketplace, as TREB consumer research suggests may happen,” he added, “an acceleration in price growth could result if listings remain at current levels.” 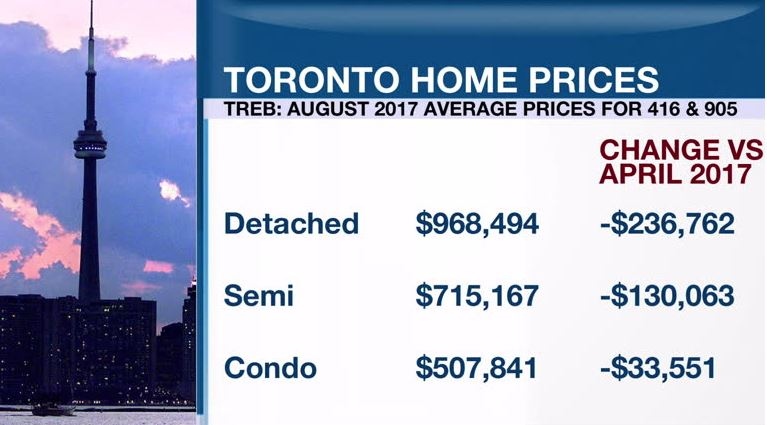