Sales in the Greater Toronto Area’s hot housing market declined in April, while prices and new listings were up considerably, according to new data from the Toronto Real Estate Board.

TREB reported Wednesday that total sales in the region were down 3.2 per cent  year-over-year. The Board notes that there were less working days in the month compared to the year before, with the Easter holiday falling in April. Sales are more likely to occur on working days, according to TREB.

Condominiums saw the greatest strength in sales, with an eight-per-cent increase in the 416 region during the month of April. Sales of detached homes slumped 8.7 per cent year-over-year and semi-detached homes sales slid 13.2 per cent in that area.

However, the number of new listings in the month were up 33.6 per cent compared to the same month in 2016. 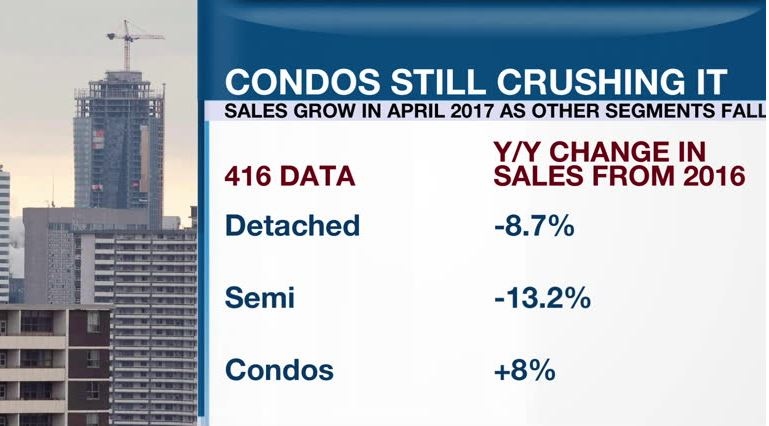 "The fact that we experienced extremely strong growth in new listings in April means that buyers benefitted from considerably more choice in the marketplace,” TREB President Larry Cerqua said in a release.  “It is too early to tell whether the increase in new listings was simply due to households reacting to the strong double-digit price growth reported over the past year or if some of the increase was also a reaction to the Ontario Government's recently announced Fair Housing Plan."

Home prices were still strong in April, with the average selling price for all home types soaring 24.5 per cent to $920,79 year-over-year.

“I think people are getting a bit jittery, a bit concerned," David Madani, senior Canadian economist at Capital economics told BNN Wednesday. "So it does sort of feel like the market is sort of peaking or cresting…if listings continue to go up, then I think that is a sign people are looking to cash out.”

The Ontario government introduced 16 new housing measures last month in attempt to cool the scorching market, and included a 15 per cent tax on non-resident speculators.

However, TREB said their data shows foreign buyer ownership and speculation in the so-called Golden Horseshoe region remains low. The Board found the number of buyers with a mailing address outside of Canada was one per cent between 2008 and April 2017, regardless of the year, and most of these buyers have a U.S. mailing address.

“It’s Canadians," Madani said. "So it’s really a story about domestic lenders and domestic borrowers. We’re seeing it in other countries, it’s not that unique. What concerns me about Toronto is that it has gone on too long. I think the key reason for that is not just the low interest rates from the Bank of Canada in response to the oil price shock, but it’s also that mortgage lending itself has become increasingly riskier."

Do you think Toronto home prices will start to cool soon?