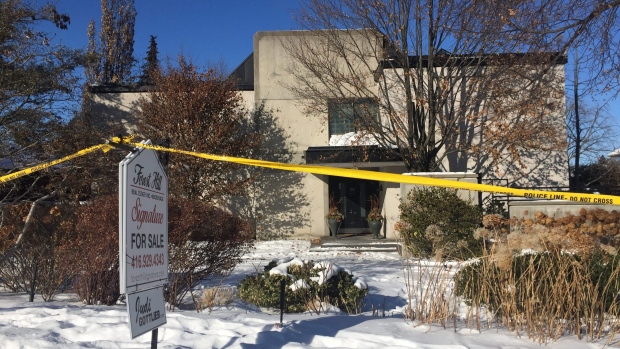 This Jan. 6, 2018 photo shows police crime scene tape marking off the property belonging to Barry and Honey Sherman, who were found strangled inside their home on Dec. 15, 2017. , AP Photo/Rob Gillies

TORONTO -- The City of Toronto has approved a request from the family of Barry and Honey Sherman to demolish the home where billionaire philanthropists were killed.

The family had submitted an application to city authorities last month saying the two-storey mansion where the pharmaceutical magnate and his wife were killed had bad memories and a stigma attached to it.

The letter, written by an unnamed agent on the family's behalf, said the home had stood vacant since the couple's bodies were found dead beside the house pool in December 2017, and no one would buy the residence.

A community council tasked with reviewing the family's request approved it at a meeting Tuesday morning, saying the house can be demolished on condition that construction fences go up around the property if necessary and the lot is cleaned and resodded afterwards.

The family's letter says they intend to put the lot up for sale once the house is gone.

The Shermans' double homicide remains unsolved, and police have not provided any substantial updates on the case in more than a year.

Investigators with Toronto police previously said the Shermans, who were in their 70s, were found in a semi-seated position by the house pool, hanging from a railing with belts around their necks.

Autopsy results revealed the pair died by "ligature neck compression," they said. Police also said there were no signs of forced entry to the home in an affluent corner of north Toronto.

In the months since their deaths, however, lawyers representing the family have alleged the force has conducted a lax investigation that left evidence uncollected and avenues of potential inquiry unexplored.

Brian Greenspan has alleged that police did not vacuum the Shermans' house in the days after they died, failed to properly check points of entry into the mansion, and did not collect sufficient fingerprint and DNA evidence.

Toronto police Chief Mark Saunders has denied the allegations, saying Greenspan and a team of privately hired investigators were not necessarily privy to all the information gathered during the police probe.

He said the team has recovered evidence, including 25 finger and palm prints, that they have shared with police as part of their proposal to pursue a joint private-public investigation.

The family has also offered a reward of up to $10 million for information that would solve the couple's killings.

Barry Sherman founded Apotex in 1974 and built it into a generic drug giant with more than $2 billion in annual revenue. He was no longer involved in the company's daily operations at the time of his death.

Honey Sherman was a member of the board of the Baycrest Foundation and the York University Foundation. She also served on the boards of Mount Sinai's Women's Auxiliary, the Simon Wiesenthal Center and the International American Joint Distribution Committee.