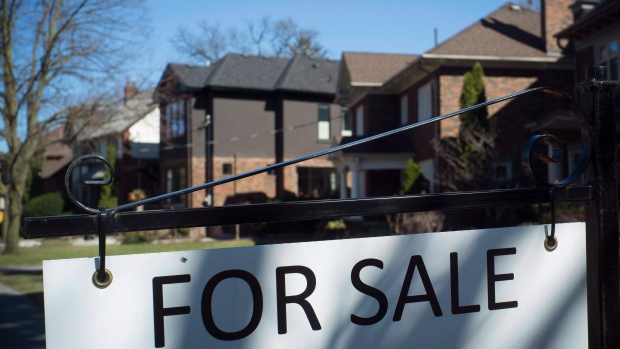 A "For Sale" sign is shown in front of west-end Toronto homes , The Canadian Press/Graeme Roy

The great slide in Toronto housing accelerated into July with the average sale price down 17 per cent from the frenzied record highs of the spring.

On an annual basis, TREB reports average home prices are up a “more moderate” 6.5 per cent. Earlier this year, home prices were up some 33 per cent year-over-year.

Sales volumes have plunged across the GTA in the wake of Ontario moving to cool the market with 16 measures, including a 15 per cent tax on foreign speculators.

As of mid-July, sales volumes had plunged 39.3 per cent from the same period last year. The detached market is taking the hardest hit, with the number of homes changing hands down almost 45 per cent compared to June 2016.

The statistics capture sales activity from July 1 to 14. It was during the tail end of that period — July 12 — that the Bank of Canada raised its overnight rate by 25 basis points.

While that’s prompted much discussion about soaring debt levels and the ability of Canadians to manage their debt, research earlier this week from CIBC suggests further regulation in the mortgage market is a much bigger concern.

The country’s banking regulator, OSFI, is taking aim at the uninsured mortgage market — where homeowners make a down payment of 20 per cent or more. The Office of the Superintendent of Financial Institutions is proposing stringent stress tests for those borrowers, in line with what’s already happening in the insured market.

Mortgage market observers say such a move could slash a buyer’s purchasing power by up to 18 per cent.

CIBC Deputy Chief Economist Benjamin Tal urged OSFI in an interview with BNN this week to rethink and delay extending the stress tests to the uninsured market, given what’s unfolding in the Toronto market.