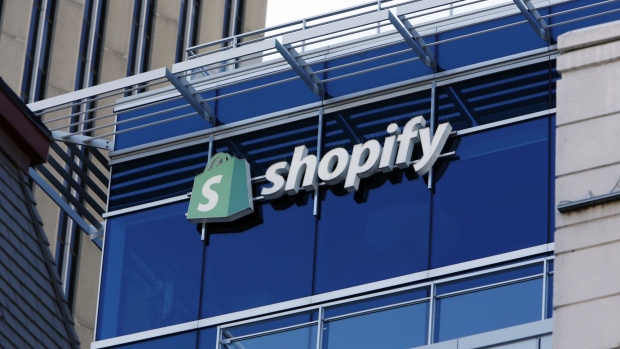 Signage is displayed on the Shopify Inc. headquarters in Ottawa, Ontario, Canada, on Thursday, May 7, 2020. Ottawa-based Shopify edged past Royal Bank of Canada to become the largest publicly listed company in Canada. Photographer: David Kawai/Bloomberg , Bloomberg

(Bloomberg) -- Shopify Inc. isn’t the only one advancing up the ranks of Canada’s most valuable companies. Changes in the economy have given the country’s benchmark stock index a makeover at the top.

Shopify briefly eclipsed Royal Bank of Canada on Wednesday as the most valuable Canadian firm, one of the few to have surpassed the country’s largest lender in recent years. Royal Bank reclaimed top spot on Thursday, but Shopify’s advance is still a big achievement for an e-commerce firm that became public just five years ago.

Three other companies -- Barrick Gold Corp., Brookfield Asset Management Inc. and pipeline operator TC Energy Corp. -- have nosed into the top 10 of the 229-member S&P/TSX Composite Index in the past five years.

Though the list has long been dominated by banks, there’s no longer a single oil producer in the top 10. Here it is as of Wednesday’s close:

And here’s what Canada’s benchmark stock index looked like on May 6, 2015: