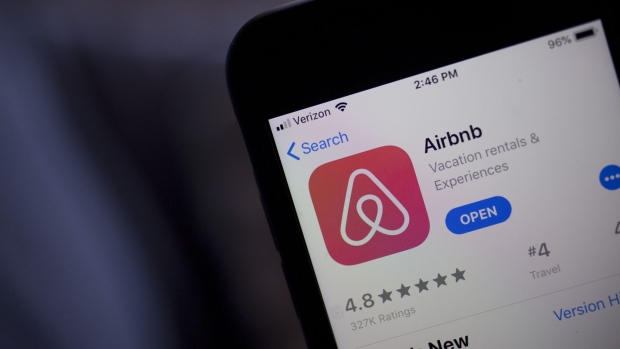 The Airbnb Inc. application is displayed in the App Store on an Apple Inc. iPhone in an arranged photograph taken in Arlington, Virginia, March 8, 2019. Bloomberg

TORONTO -- A Toronto man is suing Airbnb after being shot while attending a large party at a house rented through the online platform.

Sean McCann, a 19-year-old Humber College student, was shot in the pelvis on April 27 at a party in the city's Etobicoke region that was advertised online.

His statement of claim says he is seeking $5 million in damages against Airbnb, the homeowner, two women who rented the home and co-ordinated the "Airbnb mansion party," and the shooter.

He alleges that the shooting happened as a direct result of the negligence of the defendants, including that Airbnb should have known that minimally furnished rental properties, like the one in Etobicoke, were commonly used for parties and events where violence occurred.

Airbnb said in a statement that "the senseless violence reported has no place in the Airbnb community," and that it removed the person who booked the house from its platform.

The company announced new policies in early November to try and crack down on house parties hosted at Airbnb properties after five people were killed at a party in California.