Toronto new home prices fell at the fastest pace in more than two decades in October, further evidence that tighter mortgage lending has slowed a boom in Canada’s biggest city.

Statistics Canada’s price index for new Toronto homes fell 1.4 per cent in October from a year earlier, the most since September 1996. Across the country, the price increase of 0.1 per cent was the slowest since 2010. 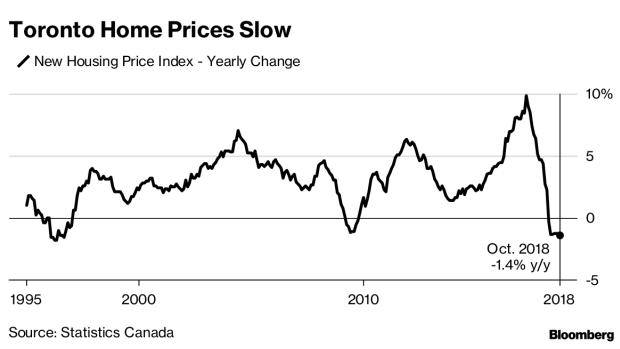 The housing market has moderated this year as federal rules made it harder to qualify for a mortgage. The Bank of Canada also raised its trend-setting interest rate five times between July 2017 and October of this year. New home prices were advancing at an annual pace of almost 4 per cent late last year before the mortgage rules took effect.

New home prices advanced 0.4 per cent in Vancouver, while they declined on a 12-month basis in Edmonton and Calgary in the struggling oil-producing province of Alberta.

On a monthly basis, new home prices were unchanged in October from September. The index includes single-family, semi- detached and row houses, but doesn’t capture condominiums that have become more popular in Toronto in recent years.