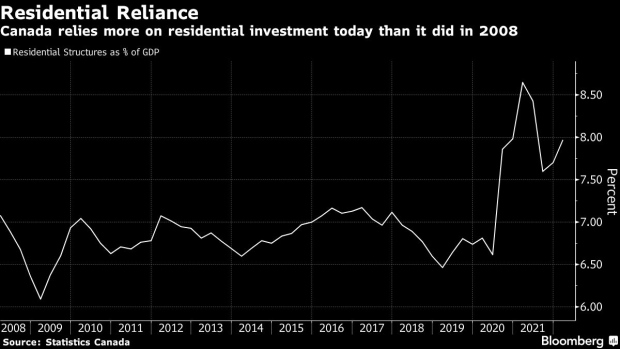 A contractor works on a home in Barrie, Ontario, Canada, on Monday, June 21, 2021. Investors account for about one fifth of new mortgages in Canada, the same share that prompted a crackdown in the U.K., and roughly five times the rate in the U.S., stoking debate over whether homes should be used as assets or just places to live. , Bloomberg

(Bloomberg) -- Home contractor Anthony Sayers thought he had a budget of C$160,000 ($124,000) for a home renovation project he had agreed to do in Toronto. Then the housing market turned and his client cut that almost in half.

“The realtor came in and basically showed them that the market is done,” he said, explaining that the clients had been depending on the sale of another property to fund the renovation. “It has turned down, and the money that they put in, they might not get back.”

Similar stories of existing projects being cut back or canceled, and new business slowing to a trickle, are multiplying across Canada’s once- booming home renovation industry. The anecdotes may be a harbinger of broader worries to come.

Canada’s housing market, including renovations, rose to more than 8.5% of gross domestic product during the pandemic, a level it hasn’t seen since the late 1980s. But with the Bank of Canada aggressively raising interest rates to control inflation, home prices are already falling and the broader real estate industry may be teetering.

“That’s when we start seeing lower housing starts, lower new construction investment, lower employment,” said Stephen Brown, an economist at Capital Economics. “We forecast that residential investment will fall by 24% over the next 12 months and, as residential investment currently accounts for about 10% of GDP, that will subtract almost 2.5% from total GDP. We still see scope for overall GDP to just about grind higher, thanks to sharp rebounds in exports and business investment, but it will be a close call as to whether there is a recession.”

With inflation running at the highest level since the early 1980s, the Bank of Canada has raised interest rates quickly, bringing its benchmark rate to 2.5% from 0.25% since March.

That has led to an almost immediate downturn in the housing market that only seems to be picking up pace: in June, Canada’s benchmark home price posted its biggest one-month drop -- 1.9% -- in data going back to 2005, following milder drops in April and May. And as that slowdown continues, there are signs it’s filtering into some of the businesses that rely on the housing market beyond the buying and selling of properties.

“People are afraid,” said Roman Orlov, a home renovation contractor in Toronto, who says new business inquiries have dropped about 40% in the last few months, and he’s heard the same thing from colleagues who do landscaping, painting, and pool work. “There is a downturn in the volume of inquiries.”

And much of that downturn, both in the housing market and related industries, came before the Bank of Canada made its biggest move yet: the one percentage point interest hike it put in place last week.

A recent survey by BNN Bloomberg and Rates.ca found that 27% of homeowners had borrowed against the value of their homes through a home equity line of credit, and more than half of those still had an outstanding balance on it. Because interest rates on this kind of debt typically track moves in the central bank’s benchmark rate, these borrowers are facing higher costs, which means they’ll have less to spend on renovations and everything else.

Last week, economists at Bank of Montreal cut their 2023 Canadian economic growth forecast to 1% from 1.5%.

“If you look at the residential construction component, which is the resale, the renovation, and the new building, that component of GDP is already contracting as we speak,” Robert Kavcic, a senior economist at BMO, said in an interview. “It’s probably the biggest factor.”