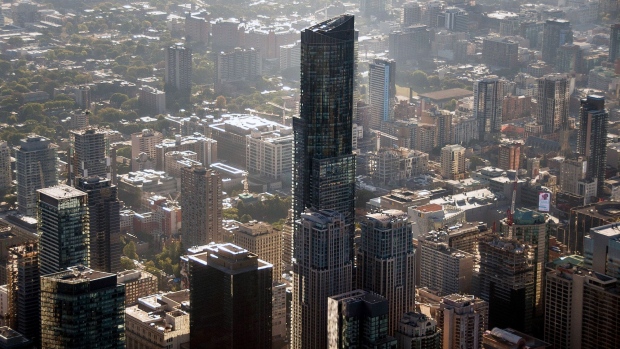 (Bloomberg) -- A major power failure in downtown Toronto left parts of the city’s financial district without electricity for hours on Thursday, affecting about 10,000 customers at its peak.

The disruption began shortly before 12:30 p.m. New York time and was caused when a barge moving a crane struck high-voltage wires in the Port Lands area southeast of the downtown core. Toronto Hydro said in a tweet just before 8 p.m. that power had been restored downtown.

Earlier, a map on the Toronto Hydro website indicated the power collapse had affected a wide swath of the city’s downtown, with areas east of Yonge Street being hit the hardest.

Some office towers ran on emergency generators while others operated normally. Trading activity on the Toronto Stock Exchange was not disrupted, according to a spokesperson. Several traders who spoke to Bloomberg News said their activities were continuing as normal. But many office workers went home early or milled around near the entrances to buildings, waiting for electricity to come back.

Toronto Metropolitan University tweeted that they were sending students home because of the power failure. Seneca College asked people to avoid its downtown campus.

Some businesses, including coffee shops and restaurants, were forced to close while others tried to sell whatever food didn’t require electricity. “Our freezer’s not working and our oven is not working,” said Nicole Ates, a barista at Daily Ritual coffee shop. “At the moment we’re just doing the best that we can.”

Toronto is home to hundreds of thousands of financial workers, though they don’t all work in the region that was affected by the power outage.

(Updates with new information about power being restored)