'There has to be action, but it starts with listening': Mercer Canada CEO on corporate diversity

More than half of Toronto’s population is foreign-born -- a higher proportion than New York, Paris, London or Sydney -- and about 52 per cent identify as a visible minority. But the city’s diversity fades in the upper echelons of its financial firms.

Canada has opened the door to large numbers of immigrants in recent years, and bank executives are quick to highlight the rising diversity of the industry’s workforce. At most banks, more than a third of their staff in Canada are non-white. Executives face more pressure than ever to do something about the glass ceiling that has long faced those employees.

“A lot of these companies are going to lose great talent if they do not act, because quite frankly they need those people who are stuck in middle management,” said Wes Hall, a prominent Black Canadian executive whose firm, Kingsdale Advisors, counsels boards and executives on governance matters. “Once they start leaving in droves it’s going to create a huge void in the company that you just can’t ignore any more.”

Last month’s killing of George Floyd in Minneapolis police custody spurred protests around the world, including in Canada, where it has reignited a debate about equality and corporate power. Hall has teamed up with some top executives -- including Victor Dodig, chief executive officer of Canadian Imperial Bank of Commerce -- to launch the BlackNorth Initiative, which has a goal of increasing the number of Blacks on boards and in executive roles.

Financial firms in Canada have left a lot of room to improve on that measure. And some believe it may be time for a more aggressive approach to changing the racial makeup of banks’ senior leadership.

“You’ve got to set objectives and measure what the important milestones are towards that objective and what needs to get done, and know quickly when you’re not on the path to success,” Royal Bank of Canada CEO David McKay said Tuesday in an interview. “If you keep doing the same old, same old, then we’ll get the same outcome. We have to approach this differently.” 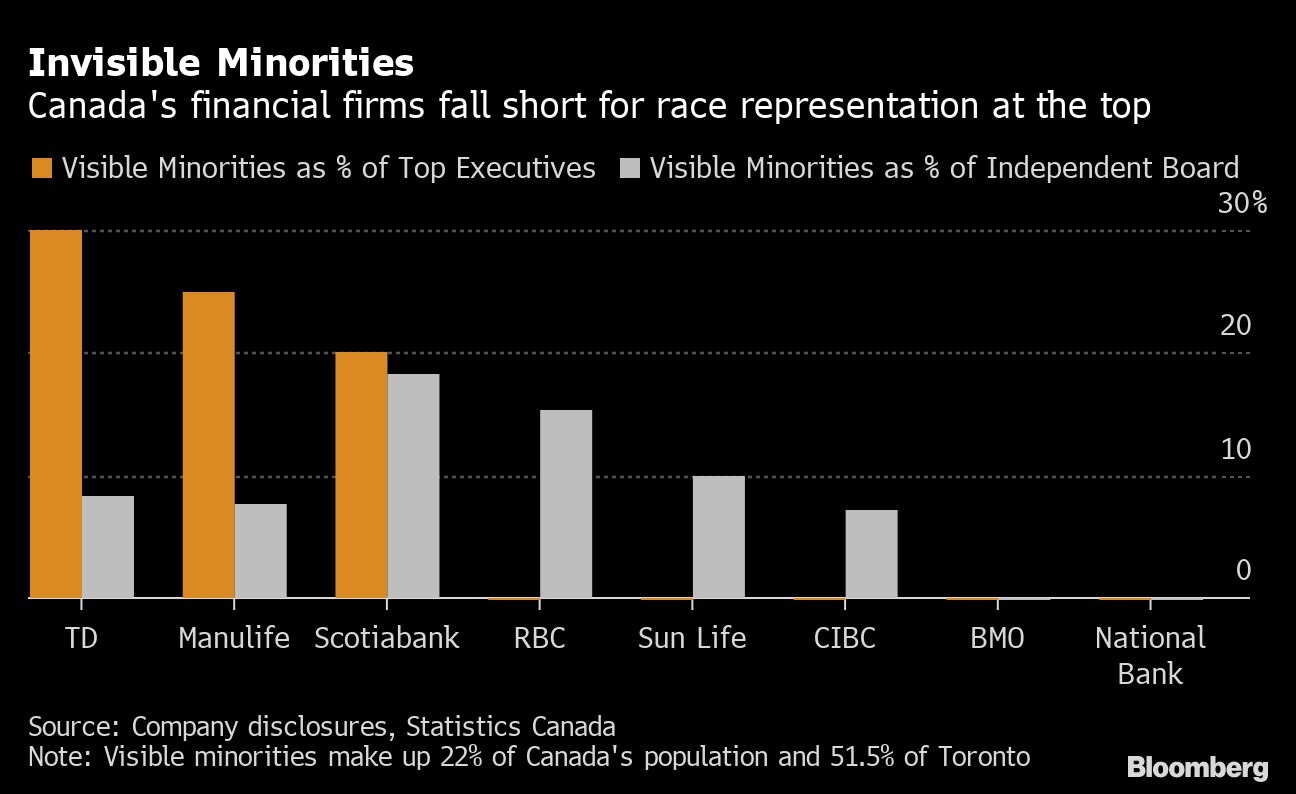 Two banks -- Bank of Montreal and National Bank of Canada -- have no racial diversity on their boards or among top executives. There are no minorities in the C-suite of Royal Bank, CIBC and insurer Sun Life Financial Inc., though they have some minority representation on the board.

“While we’ve made progress -- and we can see it in our succession pool -- we need to do more to strengthen those pools so that we have broader diversity,” Royal Bank Chief Human Resources Officer Helena Gottschling said in an interview. “We will not look like what we look like forever.”

Royal Bank, Canada’s largest lender by assets, has a program to accelerate development for minorities that targets leaders one or two levels below the executive branch and is doing more sponsorship and recruitment to change that “top-of-the-house view,” Gottschling said. As of last year, 19 per cent of executives and 27 per cent of new executive appointments were visible minorities. 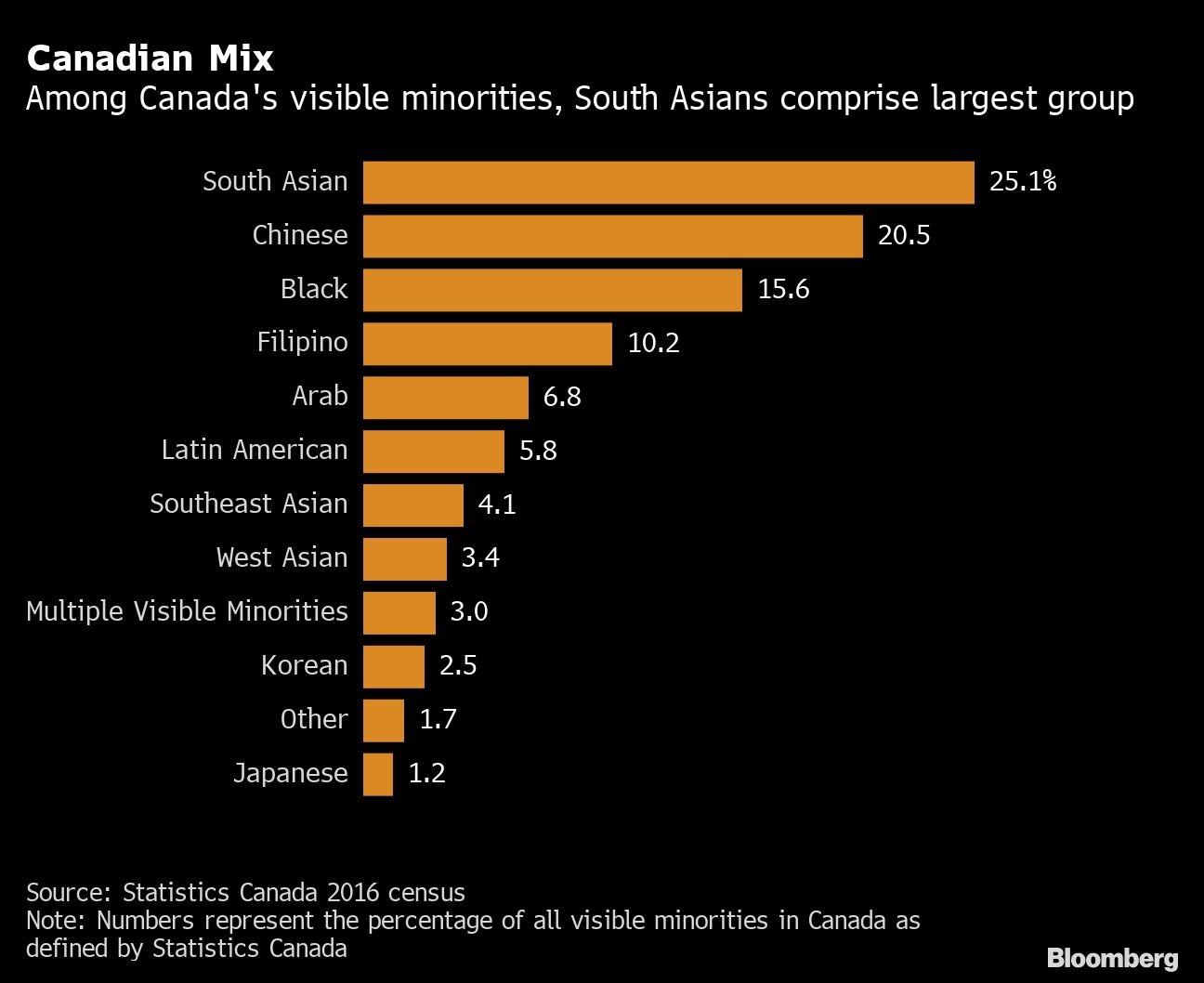 Sun Life, which has less diversity at the top than rival Manulife Financial Corp., is increasing diversity efforts including setting targets to lift the percentage of vice-presidents and above who are from a diverse ethnic or racial background, CEO Dean Connor said.

“Frankly we’ve not done enough on diversity by skin color, background, visible minority,” Connor said in a June 8 interview. “That’s something that we’re going to redouble our efforts on.”

CIBC is the only major Canadian lender with a Black person in a board or top executive role, with director Michelle Collins, though she’s the sole minority at that level in the company.

“We are experiencing the effects of decisions made probably 10, 15 sometimes even 20 years ago, which is really the development cycle it takes to get to executive or even board levels,” Anne-Marie Dunn, senior vice president of enterprise talent at CIBC, said in an interview. “If you add to that the reality that even a small amount of unconscious bias in any system can create a ripple effect, a bit of an anti-leverage point, that can impede progress.”

At CIBC’s board-approved executive roles in Canada, 18 per cent are held by visible minorities. The lender aims for 22 per cent by 2022.

National Bank’s numbers are reflective of its home base of Quebec, where boosting francophone representation in senior roles was a priority for decades, spokesman Claude Breton said. The Montreal-based lender spent the past 15 years trying to boost women and now aims to go further on visible minority representation, which stands at 24 per cent of its overall domestic workforce.

“We’ve been growing our pipeline, and now representativity at the senior manager level of 14 per cent is close to market availability and is still progressing well,” Breton said. “With regards to executive roles, market availability strongly differs between Toronto and Montreal, more so when French is factored in.”

Bank of Nova Scotia, which has significant operations in Latin America, counts two of its top executives and two directors as visible minorities, though such representation in the overall Canadian workforce slipped to 24.1 per cent in 2018 from 28.4 per cent two years earlier.

“The bank is moving at all levels to advance diversity and inclusion through several important initiatives,” Dominic Cole-Morgan, a Scotiabank senior vice-president, said in an emailed statement.

Toronto-Dominion Bank ranks among Canada’s best for diversity, with minorities making up 38.1% of its Canadian workforce and 17.6% of vice-president and higher roles. Three top executives including CEO Bharat Masrani are of South Asian descent, as is one independent director on the board.

“To build our capacity for innovation and drive results, we need to engage all backgrounds, skill sets and mindsets to create value in a unique and inclusive environment,” Girish Ganesan, global head of diversity and inclusion at Toronto-Dominion, said in an emailed statement.

The lack of Black people in top financial jobs isn’t lost on Deland Kamanga, who is Black and heads global markets at Bank of Montreal. He said he has seen a impact from targets and a hiring push that helped many -- but not all -- groups gain faster access to corporate Canada.

“Look how the demographics have changed in the ’70s, ’80s and ’90s and look at the commensurate employment of those people -- it’s been spectacular,” Kamanga said in an interview. “The one group that’s been left behind has been Black.”

Kamanga has been pushing change and he’s optimistic: He’s on the leadership committee for inclusion and diversity and co-chairs a group for Black employees, created after Darryl White became CEO in 2017. Minorities hold 39 per cent of the Canadian jobs at the bank and more than a third at the senior manager level and above, despite having none at the top.

“I see people slowly starting to move up and I see that next level down, more and more people,” Kamanga said. “I really do think it’s time, because the pipeline is there.”