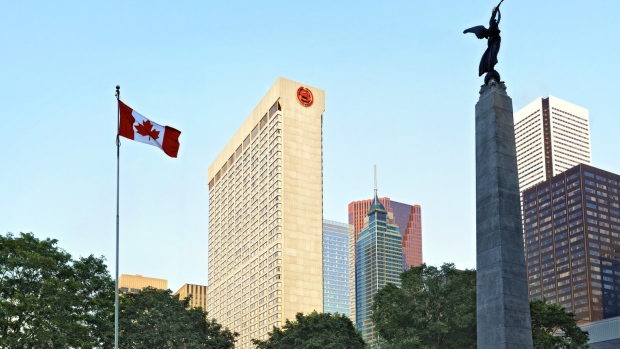 TORONTO -- The Sheraton Centre Hotel in Toronto's downtown core has been purchased in a $335-million landmark deal by an arm of Brookfield Asset Management, which says it sees potential for more hospitality acquisitions in Canada.

It's the largest-ever single hotel transaction in Canadian history, said CBRE Canada, which acted as the broker for seller Marriott International.

The purchase also marks Toronto-based Brookfield's first push into the hospitality sector at home. The alternative asset management conglomerate's hospitality portfolio has largely been focused on the U.S., but also includes assets in the U.K. and the Atlantis Hotel in the Bahamas.

"We've been looking to expand in other cities in North America, and given our familiarity with Toronto, we were very excited to have the opportunity," said spokesman Matthew Cherry.

Brookfield is not currently looking at other hotel acquisitions in Toronto, but there is potential for other transactions across Canada, he added.

"We don't view this as a one off," Cherry said. "If there is a similar opportunity to acquire an asset of this type of size and quality, we would certainly be looking at it."

The four-star hotel was purchased by a Brookfield-sponsored private real estate fund, and will continue to be operated by Marriott. The City of Toronto continues to own the land on which the hotel sits.

The Sheraton Centre has 1,372 guest rooms and is located in Toronto's financial district, close to City Hall. It also has more than 12,000 square metres of meeting and event space.

Bill Stone, CBRE's executive vice-president of its hotel division, says the Sheraton was highly sought-after and had interest from foreign buyers as well.

"It is a rare opportunity where you can buy something of this scale, that also has been renovated to the extent that it was," Stone said.

The Sheraton had recently completed roughly $110 million in renovations, including guest room refurbishments, CBRE said. However, the real estate services company said further renovations to the lobby and other public spaces are expected.

"We're looking forward to continuing to improve the operations of the hotel, and think there is significant growth and upside," Cherry said.

Hotels have been a hot commodity in recent years, and hospitality properties in Toronto have been seeing near-record occupancy rates, according to Stone. In Toronto, this has been driven in part by strong commercial development and increased tourism, he said.

The Sheraton deal now makes the 2015 purchase of the 511-room Westin Bayshore hotel in Vancouver for $280 million the second-biggest in Canadian history. The third-most lucrative transaction was the $225 million purchase of the Four Seasons hotel in Toronto in 2016.

"This is a continuation of demand for hotels," said Stone. "We do anticipate some other large scale transactions in the next six to 12 months."