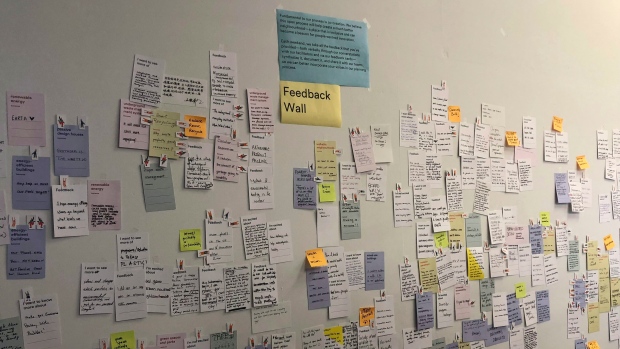 In this Aug. 15, 2018 photo, post-it notes cover a wall labeled "feedback" during a forum hosted by Google affiliate Sidewalk Labs in Toronto, Canada, regarding a proposal to take a rundown neighborhood of Toronto's waterfront and develop it into perhaps the most wired community in history. , The Canadian Press

TORONTO -- Sidewalk Labs is keen on reviewing and potentially implementing recommendations made by a panel of millennials for the Alphabet Inc.-backed company's proposed high-tech community in Toronto.

The recommendations for the smart city being developed in conjunction with Waterfront Toronto touch on the project's housing strategy, transit policies, design techniques and even its data and privacy measures, which have been marred in controversy for months because critics believe they lack transparency and safety.

The project is meant to develop a swath of prime Toronto waterfront property and outfit it with high-tech innovations that are expected to change how people live, work and play within the smart community and beyond.

The 12 panellists chosen by public policy and community advocates spent three months visiting Amsterdam, Copenhagen, Boston, New York and Malmo, Sweden to collect research for the 78-page report they released Friday. They said their goal was to make recommendations that would create an "equitable, inclusive and diverse neighbourhood" that fosters public trust while protecting the privacy of individuals.

Sidewalks Labs has said it does not intend to own the data it gathers in public spaces and instead will relinquish control of it to an independent organization to be set up and called the Civic Data Trust. The Trust will set the rules around data use, make it open and accessible to people while offering privacy protection and ensure that Sidewalk Labs does not receive any special status or rights when it comes to data access.

The panel stopped short of recommending data collected through the project by de-identified at source -- a request former Ontario privacy commissioner Ann Cavoukian has long been lobbying for and said Waterfront Toronto recently "expressed no resistance" towards the policy.

When asked why it wasn't specifically touched on, 24-year-old panellist and information studies graduate student Sharly Chan said "this is just one small piece of the puzzle."

"Data is a complex issue, so we can't cover everything," she said. "Cavoukian is asking for data to be de-identified at source and we believe we should definitely do this, but (our recommendations) adds a couple of layers to the Civic Data Trust model.'

In an statement emailed to The Canadian Press, Sidewalk Labs' head of policy and communications Micah Lasher said the company was "grateful" for the report.

"These recommendations, which correspond closely with public feedback on the Sidewalk Toronto project, will help inform our work as we draft the Master Innovation and Development Plan," Lasher added.

The panellists also asked for public art to be infused into the project, outdoor spaces to be built with maximum usage for rain and snow and the city's transit network to be expanded in a way that ensures it, cycling and walking are more convenient than driving.

Chan said she isn't sure how the project leaders will go about implementing her group's ideas, but said she expects "we will know a little bit more about that in the future."