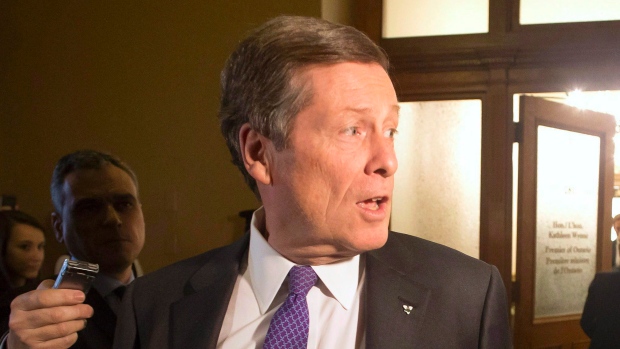 Toronto Mayor John Tory is rejecting the notion the city’s housing market is in a bubble and insists the rapid rise in home prices shows the market is healthy.

“Reports will come out from economists – I don’t dismiss them, I read them all – but I also talk to a lot of people in the federal government, the provincial government [and] in the private sector and none of those people, to a person, has as yet told me there is any kind of panic driven or panic-inducing situation,” Tory told reporters on Thursday.

“There is a robust market with rapidly rising prices at the moment which is of course a concern – but it is a concern more because it makes it harder for people to buy a home as opposed to a concern that we should be pushing panic buttons,” he said.

Tory’s comments come a day after BMO Chief Economist Doug Porter released a report labelling housing markets in Toronto and surrounding communities as bubbles. “Prices in Greater Toronto are now up a fiery 22.6 per cent from a year ago, the fastest increase since the late 1980s—a period pretty much everyone can agree was a true bubble,” Porter wrote in the report.

But those soaring home prices show Toronto’s housing market is working as it should, according to Tory.

“People are coming to the city in great numbers, wanting to live here and wanting to buy homes here,” he said Thursday, calling those symptoms of “a reasonably healthy market.”

“I think the Toronto housing market is not such that we need to push any panic buttons, we just need to keep an eye on it and be responsible in how we run the government and most of all work on increasing the supply of housing.”

Tory says he is not contemplating any “knee-jerk” measures to cool the housing market. Rather, he is calling on the provincial and federal governments to work with the city to increase the supply of affordable housing. “The city has to act responsibly to make sure we increase the supply of affordable housing – and we need to do that in partnership with the other governments,” he said.

Earlier Thursday, credit ratings agency FitchRatings rated Canada’s housing market as “stable/negative,” largely as a result of what it calls unsustainable house price increases in cities such as Toronto and Vancouver. Canada was one of only three countries given the “negative” label.