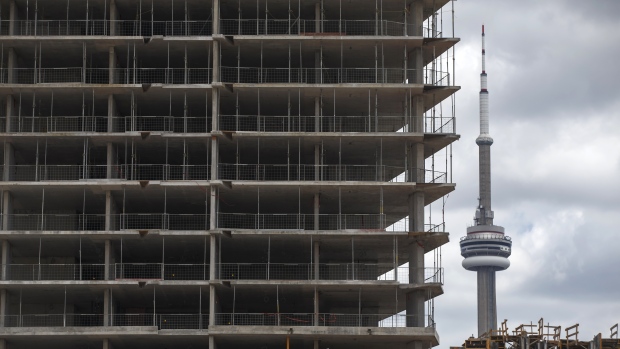 The CN Tower stands behind a condominium building under construction in downtown Toronto, Ontario, Canada, on Thursday, May 10, 2018. , Cole Burston/Bloomberg

Canada’s home sales were little changed in May, suggesting the residential real estate market is stabilizing after seeing large declines earlier this year.

Transactions fell 0.1 per cent from April to 36,373 units, the Canadian Real Estate Association said Friday from Ottawa, keeping the level close to five-year lows. Economists surveyed by Bloomberg predicted sales would fall 1.1 per cent, the average of four estimates.

The stabilization suggests home buyers are beginning to adjust to the impact of tighter mortgage rules and higher interest rates, easing concern about a sharper correction. Sales rose in about half of all markets. They climbed 1.6 per cent in Toronto, the nation’s most populous city, after falling to recession-era lows in April.

“It’s a first sign” of “stability” in the market, Benjamin Reitzes, a Canadian rates and macro strategist at BMO Capital Markets, said by phone from Toronto. “For policy makers, that’s exactly what they are looking for, that the bottom isn’t falling out for housing.”

Sales have fallen an average of 5.7 per cent each month in the first four months of 2018.

Meanwhile, benchmark prices climbed 0.6 per cent nationally in May, compared with April. The 1 per cent advance from the same month a year earlier was the slowest since September 2009, and reflected weakness in the Toronto area, the report said. Annual price gains are accelerating again in Vancouver, which saw an 11.5 per cent increase.

“The stress-test that came into effect this year for home buyers with more than a twenty per cent down payment is continuing to suppress sales activity,” CREA President Barb Sukkau said in the report. 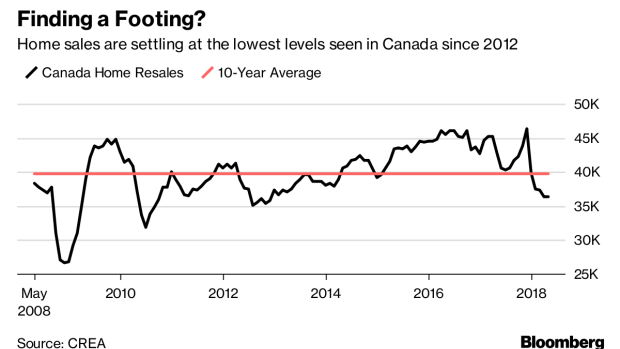