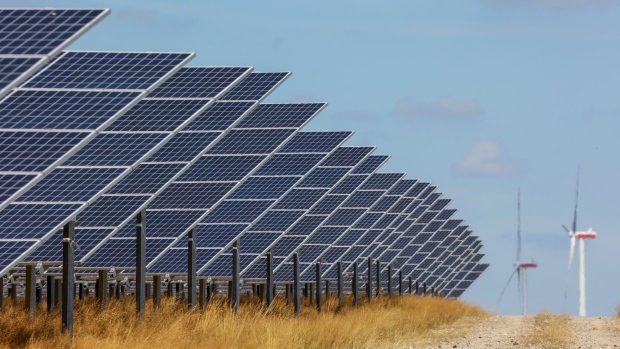 Solar panels at the Weesow-Willmersdorf solar park, operated by EnBW Energie Baden-Wrttemberg AG, in Werneuchen, Germany, on Tuesday, Aug. 2, 2022. The European Union seeking to double solar capacity to 320GW by 2025 and to hit 600GW by the end of the decadewhich would make solar Europe's biggest source of electricity, whereas today it's not even in the top five. Photographer: Liesa Johannssen-Koppitz/Bloomberg , Bloomberg

The transaction is expected to have an equity value of 30 billion rupees ($377 million) and an enterprise value of 50 billion rupees, the report said Saturday, adding that the sale process is being handled by Standard Chartered. Vector Green has 700 megawatts operational and 300 megawatts under-construction wind and solar energy assets, besides having a 1 gigawatt investment-ready asset in the pipeline, Mint said.

Vector Green Energy is owned by funds managed by Indian subsidiary of Global Infrastructure Partners. A spokesperson of Standard Chartered declined to comment to the newspaper, while spokespersons for Vector Green and Sembcorp did not answer emailed questions sent by Mint, the report said. A spokesperson for GIP said, “As a matter of policy, we don’t comment on market speculation.”

Investments are rising in India’s renewable sector as the country targets to cut 1 billion tons of carbon emissions by the end of this decade, and to reach to net-zero by 2070. Prime Minister Narendra Modi’s government has also pledged to cut emissions by 45% from 2005 levels and use non-fossil fuel sources to power half its installed generation capacity by the end of this decade.

India has existing capacity of about 15 gigawatts of solar cell and module manufacturing, while the addition of 50 gigawatts is under way, Power and Renewable Energy Minister Raj Kumar Singh said last month in an interview. Foreign investment in renewables is averaging about $9 billion to $11 billion a year, alongside major developments by domestic entities, Singh said.

Billionaire Gautam Adani has pledged to spend $70 billion on clean energy assets, including green hydrogen, while Mukesh Ambani’s Reliance Industries Ltd., one of India’s most valuable companies, plans to add production of solar panels, electrolyzers for clean hydrogen and rechargeable batteries. French oil giant TotalEnergies SE has agreed to partner with Adani on hydrogen in India.