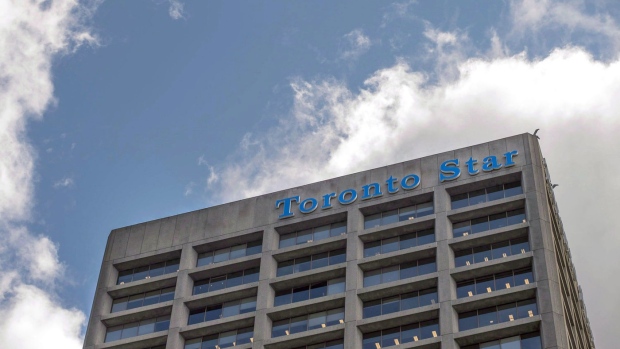 The Toronto Star building is shown in Toronto on June 8, 2016. , THE CANADIAN PRESS/Eduardo Lima

A brief hearing was held Monday after Rivett filed an application to the Ontario Superior Court last month seeking a court order to wind up the media company, citing "irreparable" damage to his relationship with Bitove.

Rivett and Bitove are equal partners in Nordstar Capital Inc., an investment company that purchased Torstar in 2020 for $60 million, and controls all of its assets, including the Toronto Star newspaper.

Lawyers representing Rivett told the court Monday that the matter is the result of "two different visions" about how to navigate the business amid challenges facing the newspaper industry globally, describing it as a "a corporate divorce" between two former friends and business partners.

They said the two parties will need to determine who will take over the company, but that there is no need to air the matter in front of the public.

A start date for the mediation-arbitration process, which will be confidential, was not confirmed during the hearing.

Rivett’s motion for court intervention will now be suspended as the process plays out.

In the court application filed Sept. 1, Rivett claims Bitove changed his mind about previously agreed-upon plans, failed to provide a budget at the Toronto Star, which he oversees as publisher, ignored proper corporate governance and disregarded his responsibilities to Torstar and Nordstar.

In the filing, he also asked the court to appoint PricewaterhouseCoopers to manage an asset sale to resolve the "impasse" between the two parties and said dissolving Nordstar would be the only way to create a clear path forward for the companies under its umbrella, which also include Metroland Media Group and NorthStar Gaming Inc.

"Given the operational state of the companies, the applicants, employees of the controlled companies, and Torstar’s news readers all stand to suffer irreparable harm if interim relief is not granted," the filing said.

In a statement last week, Bitove said he is making "no apologies" for the way he runs the newspaper business and has worked to make the company resilient, more accountable and more competitive.

"I’ve done this to ensure that the Toronto Star, Canada’s largest newspaper, can continue to deliver the news, opinion and stories our diverse audiences seek and the investigative journalism our democracy depends upon – while upholding The Star’s incredible legacy and building a brighter, stronger future," he said.

Bitove said he has focused on building a product centred on the trusted journalism that readers demand, while using that demand to build a sustainable business.

"The preferred playbook of some investors is to cut costs to the bone, strip the product bare, and shrink newsrooms to extract short-term benefit for shareholders," he said in his statement.

Last week, Unifor, which represents more than 10,000 media workers, said in a statement that it was "disheartened" by the court application.

"(The) unexpected news was completely disrespectful to the hard-working Toronto Star staff who felt blindsided by this information – or rather, lack-of," said Unifor national president Lana Payne.

"Journalists and media workers often put their lives on the line to provide fact-based reporting to the public and they deserve better."

Before teaming up with Bitove, who was part of the ownership consortium that built the SkyDome, now the Rogers Centre, Rivett was previously president at Fairfax Financial.