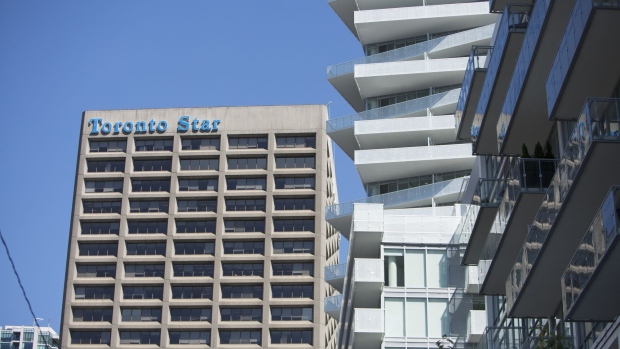 The Toronto Star building at One Yonge St. in Toronto on July 17. , Bloomberg

(Bloomberg) -- Investors in Torstar Corp., the owner of the Toronto Star and other newspapers, endorsed a C$60 million ($45 million) takeover by NordStar Capital LP after a sweetened bid from a rival group was rejected by the company’s board.

That prompted NordStar to boost its offer on July 11, up from its 63-cents-per-share proposal in May.

Torstar’s board said the new CMMH bid didn’t provide information on proposed financing and couldn’t be seen as a “superior proposal” because it couldn’t be completed without “unreasonable delay” relative to NordStar’s deal.

“We believe that CMMH’s submission of a proposal today is disingenuous and made for the purpose of confusing shareholders and obfuscating its own missteps,” Torstar Chairman John Honderich said in the statement. “The terms of the voting support agreements entered into with the Torstar Voting Trust and Fairfax have been publicly disclosed and make it impossible for their proposal to be considered a superior proposal.”

Torstar’s takeover represents the end of an era for one of Canada’s largest newspapers, which has been controlled by a voting trust of several Toronto families for decades. Torstar has been unable to turn around years of steady losses in advertising revenue and circulation. As of Monday’s market close, the stock had fallen 57% since the end of 2017.