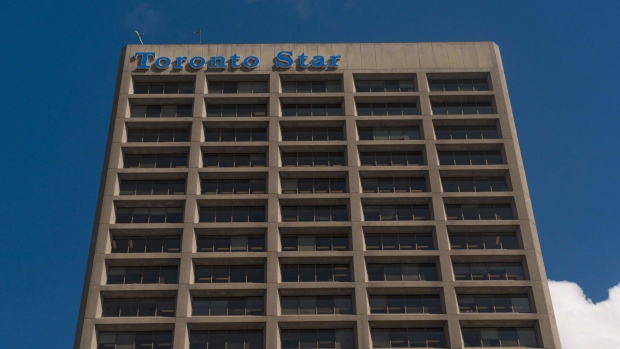 The newspaper and digital media company's net loss for the second quarter was equivalent to 22 cents per share and compared with a year-earlier profit of $4.95 million or six cents per share of net income.

Restructuring expenses for the three months ended June 30 totalled $13.85 million, up from $5.78 million a year earlier. During the quarter, the company announced it would close its Hamilton printing and mailroom operations.

Excluding restructuring and asset impairment costs, Torstar's operating loss was two cents per share, which was less than analyst estimates.

The owner of the Toronto Star has been focused on finding new sources of revenue to offset declines in its older businesses -- primarily sales of advertising in its daily and community newspapers and distribution of advertising flyers.

Torstar executives told analysts Wednesday on a conference call that print advertising revenue continues to decline and revenue from flyer distribution was also weaker during the quarter, but its transition plans are on track.

Chief executive John Boynton said the company ended the quarter with more than 20,000 digital-only subscribers, in addition to 42,500 subscribers that have digital access as part of their print package.

"We're right on expectations with all these subscriber counts, building a more consistent, predictable and recurring revenue stream," Boynton said.

However, Boynton declined to reveal the average revenue per user from the digital-only subscriptions. Similarly, he wouldn't say how many subscriptions will be required to offset lost ad revenue or when Torstar expects overall revenue will stabilize but said "that's all modelled out and at this point we're pretty comfortable."

One analyst said he was surprised that digital advertising revenue hadn't increased more but Boynton said there are many factors at play and pieces of the new strategy are being put in place.

"We spent the first year building infrastructure. We spent the second year -- the very end of (2018) and this year -- focusing on how to drive the consumer part of the business," Boynton said.

"Now we're focused on extracting the value, and starting to apply it on the ad side. So you haven't seen any of that upside on ad revenue yet."

Its segmented revenue (excluding Torstar's share of revenue from joint ventures and VerticalScope) fell to $142.4 million from $160.67 million a year earlier.

Some of decline was due to a 10 per cent fall in revenue for delivering flyers during the quarter, as some retailers experimented with reduced frequencies, but Boynton said Torstar expects a modest improvement later this year.

Boynton said cost savings "remain an important area of focus and we expect to identify further opportunities as we continue through the year."

Torstar estimates it will have $19.4 million of full-year savings related to restructuring initiatives undertaken through the end of June, with $8.6 million of that realized so far this year.

That's in addition to money from a tax credit for digital media businesses. After the second quarter, Torstar received $21.9 million from the now-ended provincial program, with a further $21.6 million expected to be received in future.

Both the federal and provincial tax credits were designed to refund some employee costs for certain work in the news industry, which has been devastated by a loss of advertising revenue to Google, Facebook and other competitors.

Analysts had estimated $127 million of revenue, a net loss of seven cents per share and an adjusted loss of five cents per share, according to financial markets data firm Refinitiv.