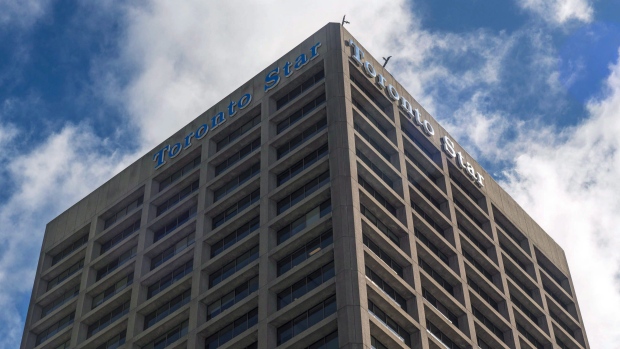 Torstar Corp. said Tuesday it will shutter its StarMetro free newspapers across the country and cut more than 100 jobs while also offering voluntary buyouts to its Toronto Star editorial employees.

The company's StarMetro papers will publish their final editions in Vancouver, Edmonton, Calgary, Toronto and Halifax on Dec. 20.

“This difficult decision was made after an in-depth review of options for the papers,” wrote John Boynton, Torstar president and chief executive, in a memo sent to staff Tuesday that was obtained by The Canadian Press.

“Print advertising volumes have decreased significantly in recent months to levels below those required to make them commercially viable,” he wrote, adding the papers developed loyal audiences over the years.

The decision will result in 73 layoffs in the editorial, advertising and distribution departments. Eleven of those employees are represented by Unifor. Boynton said employees were provided with layoff notices and explanations of their severance entitlements.

Paul Morse, president of Unifor Local 87M, said the job cuts actually total 121. They include an additional 48 staff, mostly at The Hamilton Spectator, where Torstar has a centralized copy desk that is being eliminated.

“I can't confirm that exact number, but it is correct to say over 100,” said a Torstar spokesman in an email.

A fairly unsurprising turn of events: the Toronto Star is shutting down the Star Metro newspapers across the country, which means I (and all my colleagues) will soon be out of a job. Last print edition coming Dec. 20.

Morse, whose local represents about 50 of the laid-off employees, said those staff also received notices Tuesday.

“It's just a terrible blow, obviously,” said Morse, calling on the federal government to follow through on its commitment to invest in local news.

Torstar rebranded its Metro free daily newspapers to StarMetro in April 2018. At the time, Boynton announced the company was more than doubling its pool of reporters at its western Canadian dailies, adding 20 reporters to the 15 working at Metros in Vancouver, Calgary and Edmonton.

Since then, it whittled down the ranks several times.

In June of that year, the company said it would lay off 21 StarMetro staff in Toronto as it shifted production operations to Hamilton. Those cuts included full-time editor and reporter-photographer positions, as well as part-time copy editors.

In November 2018, TorStar cut 13 jobs at StarMetro, mostly editing and production positions that were all based in Toronto.

The expansion and subsequent cuts came after a contentious community-newspaper swap between Torstar and Postmedia Network Inc.

In November 2017, the two media conglomerates announced they exchanged 41 publications, mostly in Ontario, with immediate plans to stop publishing the majority - a move that resulted in the cutting of 291 jobs. The exchange saw Torstar give up its Metro Winnipeg and Ottawa publications.

The transaction sparked a Competition Bureau investigation with John Pecman, the commissioner of Competition at the time, saying in a statement it was “investigating alleged anti-competitive conduct.”

The deadline to apply is in early December. The company did not confirm what target it is looking to reach through the program and whether further layoffs would be required.

“At this stage, we do not know how many employees will apply,” the official said.

The company also announced in Boyton's memo that it plans to open new Star bureaus in the coming weeks in four of the cities that will see their free commuter papers shutter: Vancouver, Edmonton, Calgary and Halifax.

These will be staffed by Star journalists who will provide local coverage and job postings will be posted internally Tuesday and externally Wednesday.

StarMetro journalists will be able to apply for these postings along with external candidates, Boynton said.

“Coming soon, we will be revealing news of a further expansion of our digital presence across Canada,” he wrote in the staff memo that highlighted the company's upcoming status as “a pure digital play outside of Ontario.”

“As everyone is aware, digital and mobile are our future,” he wrote, saying more of its customers consume its content digitally.

The Toronto Star previously spent $20 million on a now defunct tablet app named Star Touch, that it launched in 2015. The tablet app came after the company shelved a paywall, which it relaunched in September 2018.

Torstar holds an investment in The Canadian Press as part of a joint agreement with subsidiaries of the Globe and Mail and Montreal's La Presse.