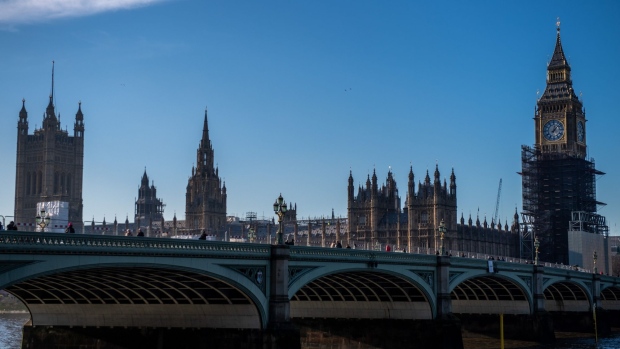 (Bloomberg) -- A meeting of rookie Tory lawmakers sparked a flurry of activity in Westminster on Tuesday as Boris Johnson’s parliamentary enforcers tried to contain a growing rebellion against the prime minister.

A group of mostly MPs from the cohort who first entered Parliament in 2019 gathered during the afternoon to discuss whether there was any appetite to move together against the prime minister, several lawmakers said.

The atmosphere in Westminster is febrile after a week of revelations linking the prime minister to parties in 10 Downing Street in apparent breach of lockdown rules. His allies and enemies alike are trying to gauge how close the rebels are to triggering a leadership contest that could force him from office.

It’s makes a dangerous backdrop for Johnson as he prepares for another showdown in Parliament on Wednesday, where he is likely to be interrogated over a claim made by his former aide Dominic Cummings that he misled MPs during his statement on the parties last week.

Under Conservative Party rules, a no-confidence vote will be triggered if 54 MPs send letters to a key committee of rank-and-file Tories calling for 57-year-old Johnson to resign. The number of letters that have been submitted is a closely guarded secret, fueling the intrigue around the process.

Some of the 107 Tory MPs who joined Parliament after Johnson’s 2019 election victory have forged close ties. They’re mainly backbenchers and as many come from northern constituencies, they have shared interests and would be vulnerable to a Labour Party resurgence.

Tory MPs are trying to establish how many colleagues have turned against the premier, but amid the cloak and dagger maneuvering in the corridors of Westminster, there’s no way to be sure who has submitted their letters.

One MP speculated that between 30 and 40 may have been received. A person familiar with the situation said that the rebels had not reached the magic number as of Tuesday night.

The Tory whips -- the lawmakers responsible for maintaining party discipline -- moved against the plotters on Tuesday, circulating the names of the supposed ringleaders in a bid to isolate them, one MP said.

The whips didn’t respond to several attempts to contact them for comment, while half a dozen junior MPs contacted by Bloomberg sought to distance themselves from any potential plot.

The turmoil inside the governing party had been given fresh energy earlier Tuesday when Johnson gave a pooled television interview which left many of his lawmakers aghast.

Read more: Boris Johnson Will Face Angry MPs as He Clings to Power in U.K.

The prime minister appeared wearing a face mask and looking exhausted. The excuse he offered for attending one of the Downing Street parties during lockdown -- that nobody had told him it was against the rules -- was barely credible, several MPs said, since Johnson, after all, had written the rules.

But more than that, the premier looked as if his spirit was broken, they said.