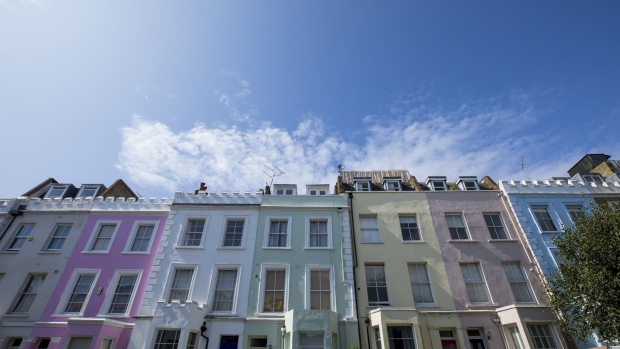 Residential properties stand in the Camden district of London, U.K. on Monday, Aug. 19, 2016. Asking prices for London homes registered their first annual increase since 2017 this month, as the Brexit-battered market started to show signs of life. , Bloomberg

(Bloomberg) -- U.K. house prices should rise by 2% next year on the back of Boris Johnson’s election win, according to property website operator Rightmove.

That’s still a relatively small increase and there will be regional variations, the firm said in a report published Monday. It sees the biggest gains coming in northerly regions, compared to a more modest rise in the south, where potential buyers already face extremely high prices. Home values in London will probably increase by 1%, the first gain since 2016, Rightmove said.

Prices in Britain have been hit by years of political uncertainty surrounding the country’s exit from the European Union, especially in the capital. Johnson’s party won a landslide victory in a snap election last week, giving him more scope to implement his plans for Brexit.

Market volatility continued in December, when asking prices in London fell by 1.5% from a month earlier, and dipped by 0.9% nationally, Rightmove said, That’s the smallest decrease for the time of year since December 2006, though, showing that sellers think demand is strong.

“With a large majority there is a higher possibility of an end to the series of Brexit deadlines, and the prospect of an orderly resolution,” said Miles Shipside, Rightmove director. “The greater certainty afforded by a majority government gives an opportunity for a more active spring moving season, with some release of several years of pent-up demand.”

A separate report from Acadata showed that house prices rose 0.6% in November from a year earlier, and that transactions for that time of year were the lowest since 2012.

To contact the reporter on this story: Jill Ward in London at jward98@bloomberg.net

To contact the editors responsible for this story: Fergal O'Brien at fobrien@bloomberg.net, Brian Swint, David Goodman