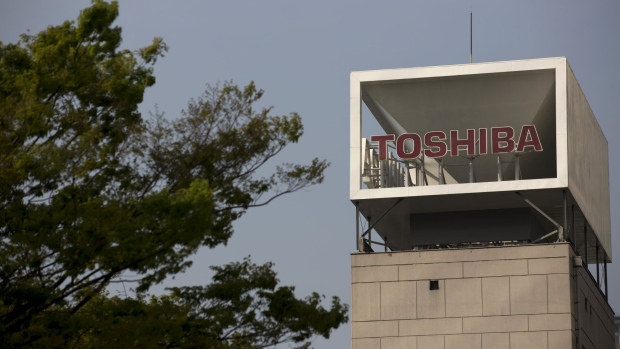 Signage for Toshiba Corp. is displayed at the company's headquarters in in Tokyo, Japan, on Tuesday, April 3, 2018. Toshiba is sticking with its plans to sell its memory chip unit despite regulatory hurdles, Kurumatani said. , Bloomberg

(Bloomberg) -- Toshiba Corp. is set to post a seven-fold increase from a year earlier in Apr.-Sept operating profit, the Nikkei reported Sunday, without saying where it got the information.

Despite the 50 billion yen ($458 million) in operating profit in the six-month period, the company will report a net loss because of the weak performance of a chip-making subsidiary and deficits in its LNG business, the newspaper said.

Toshiba is due to release half-year results on Nov. 13.

To contact the reporter on this story: Isabel Reynolds in Tokyo at ireynolds1@bloomberg.net

To contact the editors responsible for this story: Brendan Scott at bscott66@bloomberg.net, Stanley James, David Watkins