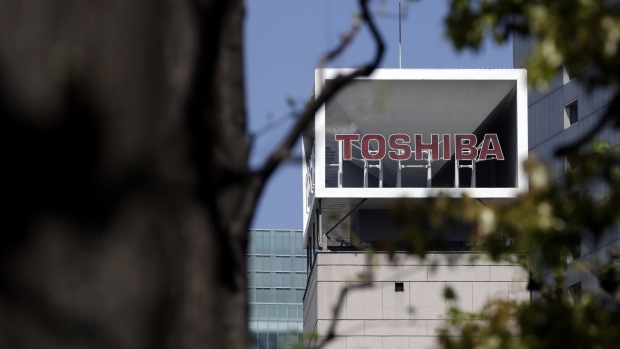 (Bloomberg) -- A buyout deal to potentially take Toshiba Corp. private is taking longer than anticipated as banks haven’t yet decided whether to extend loans to the company’s preferred bidding group, according to people familiar with matter.

Banks including Sumitomo Mitsui Banking Corp. are considering issuing commitment letters for loans to a consortium led by Japan Industrial Partners Inc. and aren’t expected to make a decision until mid-December, which is later than planned, the people said. The lenders are reviewing the JIP-led group’s plans for Toshiba’s business, and to assess whether the loans will be redeemed on schedule, the people said, asking not to be identified as the information is private.

Toshiba had previously set a deadline of Nov. 7 for the financing to be secured, Bloomberg News has reported.

JIP’s consortium, which is the preferred bidder, is in talks with banks for a takeover of Toshiba at a valuation of about 2.2 trillion yen ($15.9 billion), and is seeking about 1.2 trillion yen in syndicated loans, the people said. The consortium is seeking another 200 billion yen in commitments from banks to cover operating costs after the acquisition, they added.

Discussions are ongoing and the banks could decide not to proceed with the loans, the people said. Representatives for JIP and SMBC declined to comment.

While the JIP-led group had initially planned on completing the deal as soon as the end of March, it scrapped that estimate given the delay in getting commitments from banks, the people said. Some members of the consortium have become hesitant about the valuation that had been proposed, people familiar with the matter have said.

The JIP-led group is in talks with about 20 potential co-investors to back its offer, Bloomberg News has reported. Those include Japanese companies such as Rohm Co., Suzuki Motor Corp. and Iwatani Corp., as well as financial services firm Orix Corp.

--With assistance from Min Jeong Lee.