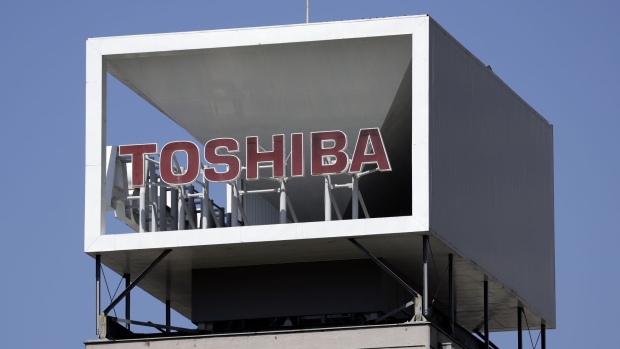 (Bloomberg) -- A consortium led by Japan Industrial Partners Inc. is considering lowering its offer for Toshiba Corp. from about $16 billion, according to people familiar with the matter.

While discussions are still ongoing, and no final decisions have been made, some members of the consortium have become hesitant about the proposed valuation for the company, citing its disappointing recent earnings, the people said. Earlier this month, Toshiba reported second quarter operating income of 7.55 billion yen ($54.4 million), coming in below analyst estimates. It also cut its operating income forecast for the full year.

The JIP-led group remains in talks with lenders about different financing structures and terms, the people said, asking not to be identified because the matter is private.

Shares in Toshiba were down nearly 2.9% at 12:57 p.m. Tokyo time following the Bloomberg News report, their largest intraday decline in more than a week. The firm has a market value of about 2 trillion yen.

A JIP spokesperson declined to comment. A representative for Toshiba said the company can’t comment as it may undermine a fair process.

The potential takeover of one of Japan’s most iconic companies faces headwinds including rising financing costs. Interest rates in many countries have risen sharply and big banks are failing to offload the tens of billions of dollars worth of buyout debt that’s still stuck on their own books.

The JIP group, which is Toshiba’s preferred bidder, is in talks with about 20 potential co-investors to back its offer, Bloomberg News has reported. Those include Japanese companies such as Rohm Co., Suzuki Motor Corp. and Iwatani Corp., as well as financial services firm Orix Corp. Private equity firms including Baring Private Equity Asia and CVC Capital Partners have also expressed interest in joining the consortium, people familiar with the matter have said.

The JIP-led consortium already has about 1 trillion yen in equity funding commitments for its proposed takeover of Toshiba, people familiar with the matter have said. Other firms that are poised to join the bidding group include life insurance companies and investment funds, the people said.

--With assistance from Yuki Furukawa and Taro Fuse.