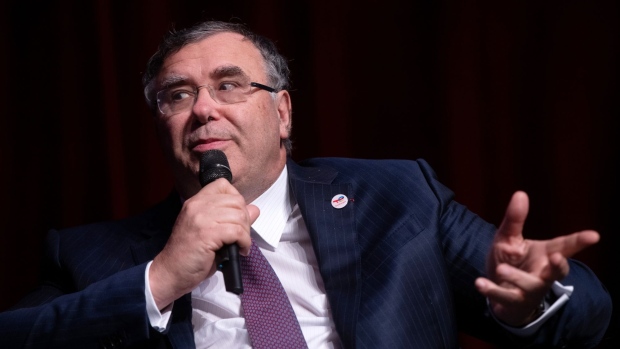 Patrick Pouyanne, chief executive officer of TotalEnergies SE, during a panel session at the Paris Air Forum in Paris, France, on Tuesday, June 7, 2022. The forum brings together aviation executives from the aeronautics, defense and space industries. , Bloomberg

(Bloomberg) -- TotalEnergies SE’s cash flows from its Russian interests may come to an end in the coming months due to escalating tensions between the Kremlin and the West over the invasion of Ukraine, said Chief Executive Officer Patrick Pouyanne.

Unlike its peers that are exiting Russia, the French company has retained its largest assets in the country -- a minority interest in gas producer Novatek PJSC and a stake in an Arctic liquefied natural gas project. It has received payments this year, but “financial circuits between Russia and the rest of the world are complex for Western companies,” Pouyanne said during a presentation to investors in New York on Wednesday.

“I see more complexity month after month,” the CEO said. “I’m not convinced that we’ll continue to have any flows from Russia in the months to come.”

Earlier on Wednesday, the European Union proposed a new package of sanctions on Moscow that would include a price cap for Russian oil sold to third countries. The announcement came after the Kremlin announced a partial military mobilization and staged widely condemned referendums to annex Ukrainian territory it has seized.

In its 2022 strategy and outlook unveiled on Wednesday, TotalEnergies for the first time presented forecasts and figures that exclude any future contribution from its Russian assets. While the company won’t make any new investments in Russia, it has decided to retain its LNG assets in the country and to make good on gas contracts, arguing that exiting would only serve to hand over assets to the Kremlin.

“As long as Europe does not sanction Russian gas, we have no way to escape from these contracts,” Pouyanne said.