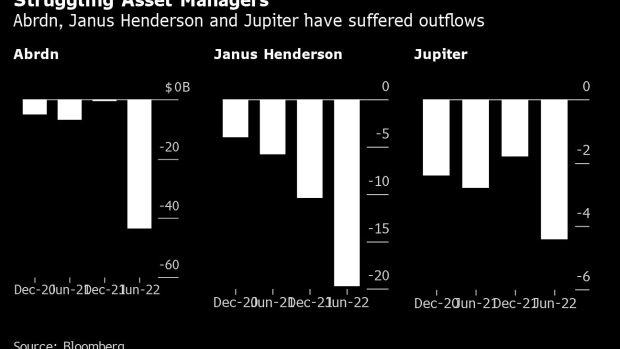 (Bloomberg) -- Some active managers have none of the luck.

They shook up senior teams, swapped out their bosses and merged to build scale. But their efforts to overcome the years long erosion of assets and profit as investors shift from actively managed funds into cheaper, index-tracking products just took another blow.

The latest round of earnings reports offer a bruising read. Rising inflation, Vladimir Putin’s war in Ukraine and fears of a looming recession have dented investment performance, prompting investors to yank yet more assets.

Even BlackRock Inc. didn’t escape unscathed. The world’s biggest money manager, which saw assets exceed the $10 trillion threshold for the first time toward the end of last year, saw them drop to $8.5 trillion as of the end of June, the lowest in almost two years.

Abrdn, formed in a 2017 merger of Standard Life and Aberdeen Asset Management, is now onto its third CEO after the firm scrapped a dual leadership structure. Stephen Bird, who took the top job two years ago has been trying to reverse years of outflows with methods including a rebrand and buying “do-it-yourself” platform Interactive Investors Ltd. While much of it was pre-planned, investors pulled a net £35.9 billion in the first six months of the year.

“The market environment is tough but we are using the dislocation to get our work done,” Bird said in a telephone interview. He said he is planning to merge around 100 funds managing a combined £7 billion to give the asset management unit an edge.

Janus Henderson, another money manager created via a combination in 2017, is also struggling to keep hold of assets. Now also onto its third CEO after its own failed dual CEO structure, the firm reported a 19th quarter of outflows in its latest filing. “The challenges facing us and the industry are steep,” Ali Dibadj, who took over as CEO in June, said on a call with analysts.

Jupiter, a now relatively small London-based firm after years of outflows eroded its size, couldn’t catch a break. “Our overall AUM and net outflow position is disappointing,” said outgoing Chief Executive Officer Andrew Formica, who abruptly announced in June he will be stepping down in October.

Formica, who had engineered the merger that created Janus Henderson before moving to Jupiter, has had his fill.

“I just want to go sit at the beach and do nothing,” he said in the interview about his plan to quit the firm and move back to his native Australia. “I’m not thinking about anything else.”