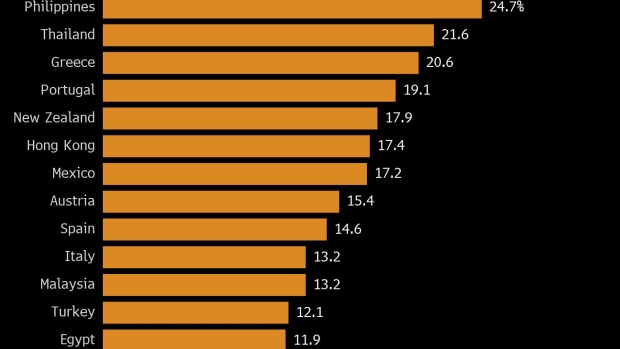 (Bloomberg) -- On Lake Como in northern Italy, spring normally spells the return of the tourists. The likes of George Clooney descend on waterfront villas, couples wander the cobbled streets and design fairs fill hotel rooms with well-heeled travelers. This year, because of the coronavirus, hoteliers are wondering whether the visitors will come at all.

Hotels in the area saw more than half their bookings canceled in three days last week as the virus spread through northern Italy in the biggest outbreak outside Asia. Now innkeepers are waiting anxiously to see the impact on the all-important summer months.

“We had our ups and downs in the past, but nothing like this,” said Roberto Cassani, 58, president of the Como hotel operators’ association. “American tourists in particular seem to be victims of a collective psychosis. I am really worried.”

As an illness that broke out in China goes global, the tourism business faces a growing threat. Many of the Chinese travelers who have driven the industry’s expansion were already staying home, after the government locked down tens of millions of people and banned sales of package tours. That emptied lodgings in the casino hotspot of Macau, cleared beaches across Southeast Asia and eliminated lines outside Louis Vuitton boutiques in Paris.

Even as the viral spread slows in China, it’s taking off elsewhere, including South Korea and Italy, which together have reported more than 7,000 of the global total of 92,000 cases. Now it’s not just Chinese who are staying home. Germans and Belgians are rethinking ski trips to Italy. Japanese are canceling visits to Bali. At stake is the $1.7 trillion in revenue that international tourism generated in 2018, according to the UN World Tourism Organization.

Many business travelers who normally fill the travel industry’s slack during the winter months are staying home, too, as companies like Facebook Inc. and Google trade face-to-face meetings for webcasts. The likes of L’Oreal SA, Nestle SA and Cargill Inc. have suspended employee travel globally for the coming weeks. Authorities have axed trade fairs that would have drawn hundreds of thousands to Berlin, Geneva and Barcelona, while Hawaii’s Festpac cultural festival was canceled.

The Global Business Travel Association says the coronavirus could cost the industry some $47 billion per month. Airlines and package tour operators have painted an equally gloomy picture, with the International Air Transport Association predicting almost $30 billion in lost flight sales.

“We aren’t capable of saying how long the situation will last,” said Ana de Pro, chief financial officer of Amadeus IT Group SA, which provides online booking software for the travel industry. Package holiday giant TUI AG announced a hiring freeze, saying it can’t yet estimate the financial fallout from the outbreak.

It’s the biggest setback for the travel industry since a downturn that accompanied the 9/11 terrorist attacks in 2001 and the SARS outbreak and the war in Iraq two years later. Airlines, tour operators and hotel companies were already wrestling with a shift in how people travel, thanks to the rise of online bookings and discount carriers. Rising passenger numbers, including millions of new travelers from China, had cushioned the blow for airlines, which relied on rapid consolidation to fuel profit growth. Now they’re lurching toward a crisis.

While Chinese flights are resuming after much of the country’s air traffic was grounded earlier this year, fallout is spreading in Europe and elsewhere. Deutsche Lufthansa AG and British Airways parent IAG SA issued profit warnings over the coronavirus, while EasyJet Plc and Ryanair Holdings Plc have canceled services and Italian carrier Alitalia SpA laid off 4,000 workers temporarily. Some ticket-holders for flights are simply not turning up, the air transport association said.

The cruise industry was among the first to get hit, with passengers quarantined on virus-stricken liners such as Carnival Corp.’s Diamond Princess, turning holiday dreams into nightmares for thousands of guests. MSC Cruises’ Meraviglia was turned away by two Caribbean ports before returning to Miami this week.

For local economies dependent on tourism, the full impact will be broader, as travelers weigh risk and benefit for the busy summer season. Each lost booking is not only a blow to hotels and airlines but also to the myriad other businesses—from Parisian luxury boutiques to Asian street-food stands—that rely on travelers.

On Boon Tat Street, Singapore’s outdoor satay market where tourists typically come to feast on cheap, tasty skewers, vendors say business is down 70% to levels not seen since the SARS outbreak.

“It’s 7 o’clock. We’re normally packed by now,” said Emmy Mohammed, looking out across half-empty tables. “Now, no one is here.”

Shares of luxury-goods companies such as LVMH, Burberry Group Plc and Kering led last week’s global stock rout as a report by Boston Consulting Group and Sanford C. Bernstein said industry sales could fall by as much as 40 billion euros ($44 billion) in 2020.

With the travel industry in the first line of fire, the OECD featured a picture of an empty airport baggage-claim hall on the cover of a global economic outlook this week, when it cut this year’s growth forecast to 2.4% from 2.9%, which would be the weakest since 2009.

The outbreak has hit particularly hard in Italy, where travel and tourism generate 13% of economic activity, according to the World Travel and Tourism Council. Normally at this time of year, skiers from across Europe head for Cortina d’Ampezzo, Val Gardena or Cervinia, some staying overnight in Milan or Venice on the way.

With alarm growing over the virus, some vacationers self-quarantined in their hotels instead of hitting the slopes, shopping or eating out. Maria Minkova, a 39-year-old civil servant from Brussels, returned home early from what was supposed to be a week in the Dolomite mountain resort of San Vito di Cadore.

“The decision to leave was dictated not so much by fear of the virus, but by the unknown measures the Italian or other European authorities might decide to take,” Minkova said. After hearing about hundreds of people quarantined in a hotel on the Spanish island of Tenerife, she worried the same might happen to her. Now Minkova is waiting to see how things evolve with the virus before making reservations for the Easter holidays.

Worries like those are exactly what the travel industry doesn’t want to hear. Some, such as Florence Airbnb host Simona Bellini, have resorted to direct emails to try to explain the situation.

“Our life goes on normally,” Bellini wrote to customers who had booked a stay in her one-bedroom apartment near the city’s Duomo. “We wanted to explain to our guests that we are not a quarantined city,” she added in a separate note.

Some travelers, though, say the risk is simply too great. In Berlin, tech company manager Jaime Fernandez-Galiano and his wife, who is seven months pregnant, canceled a family trip to northern Italy after her doctor advised them not to go. Fernandez-Galiano’s company would also have required him to work at home for 14 days after the trip to minimize the risk of spreading the virus to his team.

To contact the authors of this story: Naomi Kresge in Berlin at nkresge@bloomberg.netFlavia Rotondi in Rome at rotondi@bloomberg.netRichard Weiss in Frankfurt at rweiss5@bloomberg.net

To contact the editor responsible for this story: Eric Pfanner at epfanner1@bloomberg.net