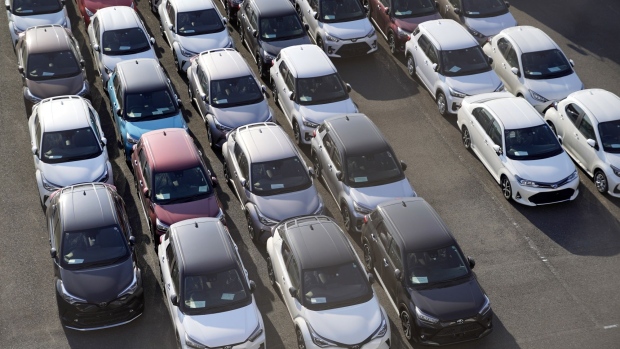 Toyota Motor Corp. vehicles bound for shipment at a port in Yokohama, Japan, on Saturday, Oct. 31, 2020. Japan’s exports fell by the smallest margin in seven months in September in another sign that the pandemic’s hit on global trade is easing. Photographer: Toru Hanai/Bloomberg , Bloomberg

(Bloomberg) -- Strong global demand for cars boosted Toyota Motor Corp.’s sales to a record for the month of June, with production seemingly unfazed by an industrywide shortage of semiconductors.

Worldwide automobile demand is saoring in 2021 after sales floundered last year. At the same time, a prolonged chip shortage is continuing to crimp production. This has led to dwindling dealership inventories with some automakers unable to keep up with demand.

Cox Automotive estimates that new-vehicle inventory in the U.S. was at a record low at the beginning of this month. These conditions are likely to increasingly impact automaker sales going forward, according to the research firm. July’s estimated sales pace is the slowest the U.S. market’s seen since last August, and “if inventory levels do not improve we could see the pace drop even more,” Cox Automotive senior economist Charlie Chesbrough wrote in a note.

Toyota has fared better than others during the chip shortage due to supply chain savvy and a strong stock it keeps of key components such as semiconductors. It produced 50,000 more units in June than it did in the same month in 2019, before the pandemic.

But there are other headwinds. Toyota said Thursday it’s extending production halts in Thailand as the Southeast Asia region grapples with re-surging Covid-19 cases.

Separately, Nissan Motor Co. said Thursday that global sales gained 1% last month to 339,445 units. Global output climbed 15% to 296,415 vehicles, though that was below the 375,551 units produced in June 2019 before the pandemic. Nissan is expecting production to be most impacted by the semiconductor shortage in the current July-September quarter.

Toyota and Honda report results for the recently ended April-June quarter on Aug. 4.

(Updates with Nissan and Honda figures.)