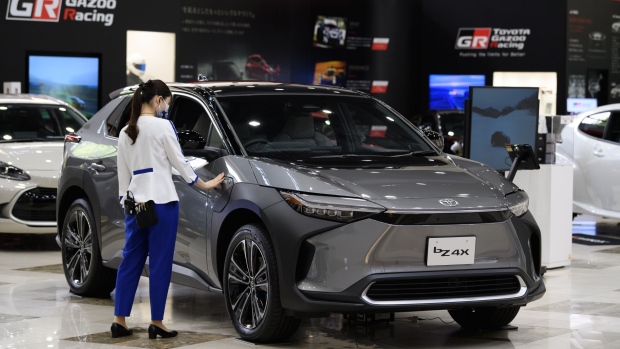 (Bloomberg) -- Toyota Motor Corp. will restart sales of the bZ4X, its first mass-production battery electric vehicle, after fixing an issue with detaching wheels that led to a recall of 2,700 units worldwide.

The automaker submitted a report Thursday on the cause of the defect and remedial steps to fix it to Japan’s transport ministry. Newly designed hub bolts will be used to attach the wheels, replacing ones that were prone to loosening.

Read more: Toyota Offers to Buy Back EVs Over Risk of Wheels Coming Off

The world’s biggest carmaker is accelerating its push to electrify more of its lineup, even as it views hybrid and hydrogen fuel cell cars as part of a greener future. The company unveiled a plan last year to invest 4 trillion yen ($28 billion) to supercharge its EV push, with a target to sell 3.5 million units annually by the end of the decade.

Toyota also said it found another defect on the bZ4X’s curtain-shield airbags that could cause injuries and has taken steps to make sure they’re properly installed. The vehicles were recalled in June.

In Japan, Toyota will resume sales of the bZ4X on Oct. 28, while the timing of US sales is yet to be decided, Chief Technology Officer Masahiko Maeda said online. Production resumed Thursday, he added.

Toyota will have to revise its production and sales forecast due to the recall, according to Maeda. The automaker had planned to make and sell 5,000 units in the initial year in the domestic market.