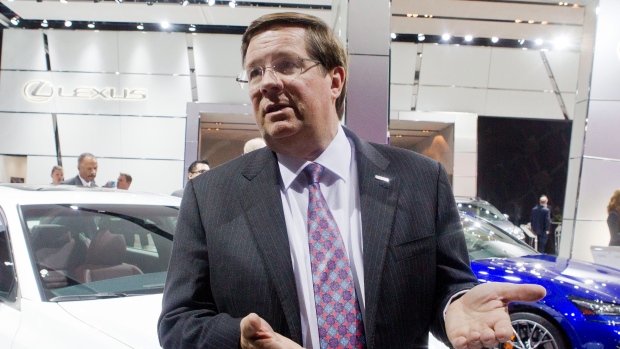 Toyota Motor Corp.’s longest-serving American head of its U.S. business is retiring and will be replaced by a Japanese executive who’s little known outside the company.

Jim Lentz, a 37-year Toyota veteran, will retire and step down as chief executive officer of Toyota Motor North America on April 1 and be replaced by Tetsuo “Ted” Ogawa, who’s been chief operating officer of the regional unit since January.

The shake-up comes at a delicate time for Toyota, which has struggled along with other automakers to adjust to shifts in U.S. environmental and trade policies. The company was targeted by President Donald Trump soon after his election for investing in Mexico and has been uncharacteristically vocal in criticizing the administration’s finding that imported cars threaten national security. More recently, the Prius maker came under fire from California for siding with the White House in a fight over emissions standards.

Lentz, 64, said the decision to retire was his own and part of a handover plan two years in the making. “The industry is in good shape and Toyota is in good shape,” he said in an interview. “We have a very orderly succession plan.”

The shares of Toyota rose less than 1 per cent in early trading in Tokyo Thursday.

Ogawa, 60, has split his time between the U.S. and China for the past decade, and has worked out of Toyota’s main U.S. office since 2017. Unlike Lentz, who has been the public face for Toyota in the U.S. for a decade and hasn’t shied away from policy issues, Ogawa has flown under the radar since moving to Plano, Texas.

“I am humbled and excited to continue working with the Toyota leadership team to create an even more dynamic and vibrant company,” Ogawa said in a statement. Toyota declined to make him available for an interview.

Lentz was thrust into the national spotlight in 2010, when as U.S. sales chief he testified before Congress alongside President Akio Toyoda over Toyota’s sudden-acceleration recall scandal. He was promoted to head of the North American business in 2013 and has run it since then, surpassing the tenure of Jim Press, who served in a similar role for a little over a year before leaving the company in 2007.

The decision to choose a lifelong employee and Japanese national over an American or company outsider reflects a desire for continuity, according to Lentz, who said Toyoda sought someone who’s both steeped in Toyota’s culture and its U.S. business. “While he may be Japanese, Ted understands the U.S. market,” Lentz said. “I really don’t see a Japanese influence coming into North American decisions.”

After joining Toyota from Ford Motor Co. in 1982, Lentz worked his way up the Japanese automaker’s corporate ladder in the U.S., taking his first executive position as a group vice president in 2004. Known for an unflappable demeanor, he has overseen Toyota’s push to localize its manufacturing and sales operations, and also to build up a significant lobbying presence in Washington. In March, the company committed to investing almost US$13 billion in the U.S. over a five-year period ending in 2021.