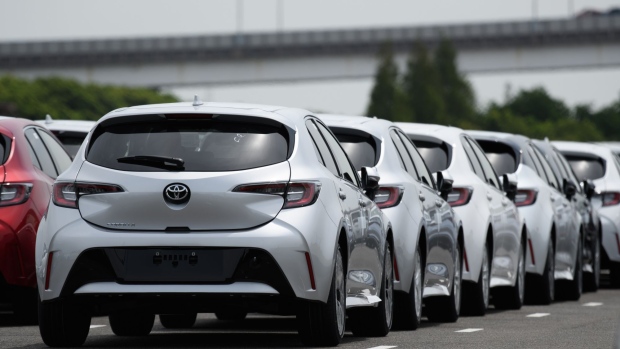 Toyota Motor Corp. Corolla vehicles bound for shipment at the Nagoya Port, in Tokai, Aichi Prefecture, Japan, on Monday, Aug. 23, 2021. The worsening chip shortage forced the world’s No. 1 automaker suspend output for several days at almost all its plants in Japan next month, forcing a 40% cut in production plans. Photographer: Akio Kon/Bloomberg , Bloomberg

The world’s No. 1 carmaker produced 512,765 vehicles in September, down from 841,915 cars a year earlier, Toyota said in a statement Thursday. Global sales also fell 16% for the month, the first year-on-year drop in 13 months.

The steep production cuts fall broadly in line with Toyota’s August announcement that it would be reducing September production by around 40%, or 360,000 vehicles, from its original plan.

The decline marks the beginning of a production pullback period among Japanese automakers. Toyota, Honda Motor Co. and Nissan Motor Co. began adjusting output in September as a resurgence of Covid-19 cases in Southeast Asia disrupted suppliers’ operations. Those supply chain issues have continued to weigh on production plans through next month.

At the same time, conditions do appear to be improving. Toyota is targeting a November output level that’s up from the same period in 2019 and 2020. It aims to ramp up production in the latter half of the fiscal year to make up for lost units.