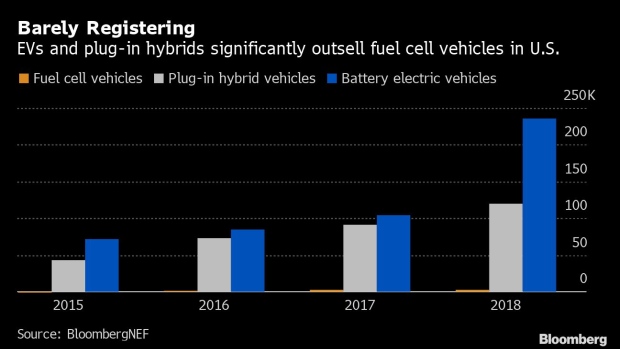 (Bloomberg) -- As others automaker plan battery-powered crossover SUVs and trucks, Toyota Motor Corp.’s vision for the future of driving remains a hydrogen-sipping sedan.

The Japanese behemoth will begin sales late next year of the second-generation Mirai, its fuel cell-powered four-door, and ramp up annual production by 10-fold from the current model. Toyota’s bet that it can position a hydrogen sedan for more of a mass market flies in the face of rivals wagering on putting batteries into the bigger-bodied vehicles consumers are buying.

Toyota has been slower than peers to embrace EVs, citing uncertain demand in key markets including the U.S. and technical hurdles that limit battery range and recharging times. While the company has pledged to offer an electrified version of every model in the next five years, and 10 fully electric vehicles by early the next decade, it’s also going to keep coaxing consumers to give hydrogen a try.

“Toyota won’t be putting all our eggs in one technology basket,” Doug Murtha, Toyota’s U.S. group vice president for corporate strategy and planning, said at a briefing in Greensboro, North Carolina.

Toyota’s near-term electrification goals in the U.S. center on its gas-electric hybrid powertrains. It currently sells six hybrid vehicles and said Thursday it will add a plug-in hybrid version of its RAV4 crossover next year.

The company plans to increase sales of hybrid cars and SUVs in the U.S. to 25% of deliveries by 2025, up from about 9% today.

Toyota began developing hydrogen-powered cars more than 20 years ago, but progress has been slow due to high material costs and steep hurdles to setting up refueling infrastructure. Recent technological advances halved the cost of fuel cell stacks that mix hydrogen and oxygen to produce electricity, allowing the carmaker to boost global output from 3,000 a year in 2018 to 30,000 next year and 200,000 by 2025, Taiyo Kawai, general manager of the company’s hydrogen efforts, told reporters during a briefing in London.

Rival automakers such as General Motors Co. in the U.S. and BMW AG in Europe have invested in fuel cell technology but are prioritizing EVs in their current and future zero-emission products. In the U.S., only Toyota, Honda Motor Co. and Hyundai Motor Co. sell fuel cell-powered passenger cars -- and only at a handful of dealers due to the scarcity of hydrogen stations.

Fuel cell vehicles offer several advantages over battery-powered cars, including quicker refueling times and longer driving ranges. But they remain a novelty, accounting for less than 0.1% of the nearly 100 million vehicles produced each year, according to research by the National Academy of Sciences.

“Unfortunately, despite years of education efforts, hydrogen cars are still a mystery to most people,” said Jackie Birdsall, a senior engineer at Toyota’s R&D center in Gardena, California. “The good news is that fuel cell technology is gaining momentum around the world,” she said.

Improvements have been made to shrink the size of hydrogen fuel tanks and reduce the amount of costly platinum needed for fuel cell stacks. But there’s still more to do, including replacing platinum with cheaper synthetic materials, said Shawn Litster, a mechanical engineering professor at Carnegie Mellon University.

Toyota, which loses money on the current Mirai, hasn’t said when it plans to break even with a future version. The company showed a near production-ready model to reporters this week in Greensboro, but wouldn’t say when the car will make its official public debut.

The first Mirai -- which means “future” in Japanese -- debuted in late 2014, but availability in the U.S. has been limited to California and Hawaii. California has spent about $100 million over the past several years to build out a network of hydrogen stations. The state currently lists just 38 retail locations that are operational; another 22 are in various stages of development.

The first-generation car’s oddball looks, $58,500 sticker price and cramped interior made it a hard sell for dealers. Most U.S. drivers lease the Mirai, and experiences with the futuristic vehicle have been mixed.

Lawrence Kopp, a 42-year-old San Diego area resident, traded his Mirai in for a gasoline-powered Ford SUV in August after two years of headaches. Too few hydrogen pumps and a lack of cabin space wasn’t a good fit for a father with young children. “It was such a hassle I was ready to go back to a gas vehicle,” the corporate real estate executive said.

The new version of the Mirai is sleeker and more coupe-like, with a lower, longer and wider stance. It has room inside for five passengers, one more than the current model, and sports racier 20-inch wheels.

Toyota says the Mirai will make a 30% leap from the existing model’s 312-mile range. Pricing won’t be announced until later, but it will be sold as a premium vehicle under the Toyota brand. Sales may be expanded to some states in the Northeast and Northwest, pending their buildup of hydrogen station networks.

Toyota’s U.S. executives said that while they may prefer to have an SUV to sell, the company has stuck with a sedan body style to compete with premium models where passenger cars are still popular. In addition to Japan, Europe and the U.S., the Mirai will be sold in China, Australia and parts of the Middle East.

“If I were king, we might have gone for something larger,” Murphy said. “But this needed to be a vehicle for global markets, not just us here.”

To contact the reporter on this story: Chester Dawson in Southfield at cdawson54@bloomberg.net

To contact the editor responsible for this story: Craig Trudell at ctrudell1@bloomberg.net