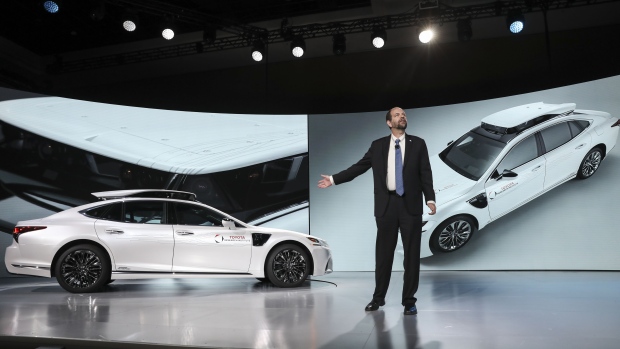 Attendees take pictures of the Toyota Research Institute Inc. (TRI) P4 semi-autonomous prototype based on the current Lexus LS500h sedan during the Toyota Motor Corp. press conference at the 2019 Consumer Electronics Show (CES) in Las Vegas, Nevada, U.S., on Monday, Jan. 7, 2019. Dozens of companies will give presentations at the event, where attendance is expected to top 180,000, with the trade war between the U.S. and China as well as Apple's sales woes looming over the gathering. Photographer: Patrick T. Fallon/Bloomberg , Bloomberg

(Bloomberg) -- Toyota Motor Corp. -- in an unusual move for the cut-throat car business -- has decided to share with rivals an automated safety system that uses self-driving technology to keep cars from crashing.

Known as the Guardian System, the technology will take control of a car and steer it around an impending crash or accelerate out of the path of an oncoming vehicle that is running a red light. The system, due to hit the road early next decade, has the potential to save so many lives that Toyota felt compelled to share it with any company that would like to use it, Gill Pratt, head of the automaker’s Research Institute, said at CES in Las Vegas Monday.

“We were thinking about what would be good for society,” Pratt said at a press conference at the trade show formerly known as the Consumer Electronics Show, which has become a showcase for driverless cars. “We will not keep it proprietary to ourselves only. But we will offer it in some way to others, whether that’s through licensing or actual whole systems.”

Self-driving cars and related mobility services could become a $10 trillion market, according to Ford Motor Co. Chief Executive Officer Jim Hackett. Toyota’s seemingly selfless act could pay off in fat royalties and potentially burnish its reputation as a safety and technology leader just as those attributes become critical to the autonomous age. Toyota insists it’s about saving lives in a world where 1.3 million people die on the highway each year.

“This is a super advanced driver assist system,” said Ryan Eustice, senior vice president of automated driving at the Toyota Research Institute. “There’s a real opportunity to have a near-term impact on saving lives.”

The technology, which Toyota has been developing for three years, can take over and guide a car out of harm’s way when the human driver becomes drowsy, distracted or drunk, Pratt said. It uses many of the same sensors found in fully self-driving cars, such as cameras, radar and light-reflecting lidar, to determine the safest path to take, and corrects human errors, which regulators say is the cause of more than 90 percent of road deaths.

"The human is still the primary driver," Eustice said. "It is working with the human and creating a bubble around you of 360-degree situational awareness.”

Beyond the safety benefits, the driver-assist features improve the skills of the human driver to perform more complicated maneuvers, such as taking on a twisting mountain road with sharp switchbacks.

“This amplification of the human really makes the car even more fun to drive,” Eustice said.

To contact the reporter on this story: Keith Naughton in Southfield, Michigan at knaughton3@bloomberg.net

To contact the editors responsible for this story: Craig Trudell at ctrudell1@bloomberg.net, Lena Lee, Jeff Sutherland