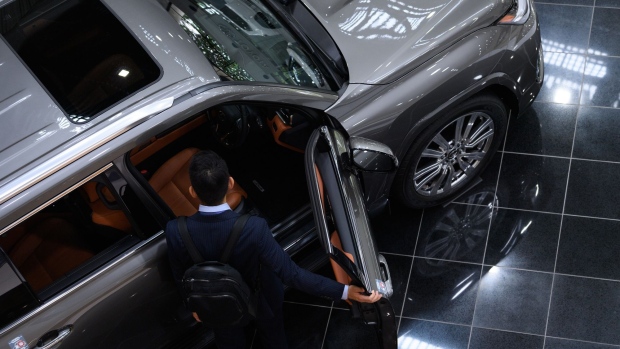 (Bloomberg) -- Toyota Motor Corp.’s global output rose for the first time in five months in August, led by gains in overseas markets -- in particular Southeast Asia, where a Covid surge disrupted supply chains a year ago.

The world’s biggest automaker made 766,683 vehicles in August, up 44% from a year earlier, according to a statement Thursday. Global sales rose 3.8% to 777,047 units, the first increase in 12 months, the Japanese automaker said.

While Toyota still faces a shortage of semiconductors and is battling lingering supply-chain constraints stemming from the pandemic, the situation has improved from 12 months ago when Covid cases were higher, causing factory shutdowns that led to a dearth of parts. Toyota has stuck to its production target of 9.7 million vehicles for the fiscal year through March 2023.

Toyota’s sales, profit and cash flow could exceed pre-pandemic times, while net debt may be lower -- potential catalysts for the company to reclaim its prior Aa/AA tier ratings in the intermediate term.

Toyota’s output in Japan in August rose 5.6% from a year earlier to 196,038 units, also the first increase in five months, according to the statement.

Meanwhile, Nissan Motor Co. said its global output rose for a second month in August, climbing 9% from a year earlier to 288,218 vehicles. However, sales fell 16% to 254,842 units. Honda Motor Co.’s global output rose 27% to 347,661 units, the third consecutive month of gains, according to a statement.