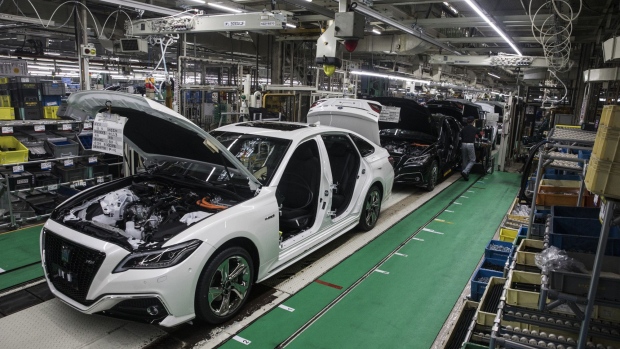 Toyota Motor Crop. Crown vehicles stand on production line at the company's Motomachi plant in Toyota city, Aichi, Japan, on Thursday, July 26, 2018. Toyota may stop importing some models into the U.S. if President Donald Trump raises vehicle tariffs, while other cars and trucks in showrooms will get more expensive, according to the automaker’s North American chief. Photographer: Shiho Fukada/Bloomberg , Bloomberg

(Bloomberg) -- Toyota Motor Corp. shares rose after the company set targets for November production levels above those seen in recent years, even as it announced ongoing parts shortages.

More notably, Toyota is maintaining its full-year production target of 9 million vehicles for the 12 months through March, despite having to slash production in recent months. The company said its efforts to meet this target are being helped by smaller-than-anticipated production cuts in September and October and the easing of Covid-19 restrictions in Southeast Asia.

Toyota’s November outlook is “more or less normal” given past production levels for the month, SMBC Nikko Securities analyst Toshihide Kinoshita wrote in a note. This is a sign production is on track to normalize, he said.

Toyota shares rose as much as 3.4% in early trading in Tokyo Monday, their biggest increase since Oct. 8 on an intraday basis. The stock is up more than 28% this year.

Toyota appears to be on track to clear its full-year target now, given the November target and supply chain recovery momentum, Citi Research analysts wrote in a note. The original 1 million vehicle target suggests expectations for output in the next fiscal year could rise, they said.

“The worst period is over,” Kazunari Kumakura, the chief of Toyota’s purchasing group, said in a briefing Friday. “We’re seeing lower risks.”