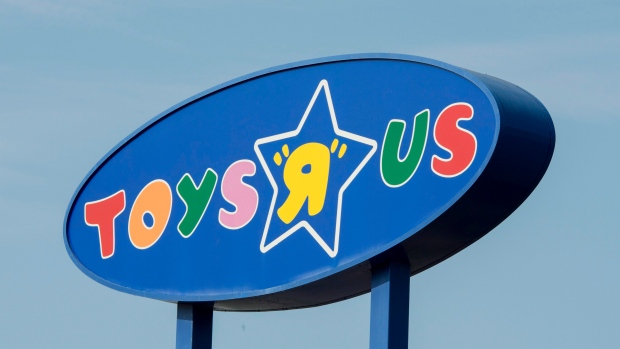 A Toys "R" Us sign is seen Tuesday, September 19, 2017 in Montreal. Toys "R" Us has filed for bankruptcy protection in the United States and says it intends to follow suit in Canada. , THE CANADIAN PRESS/Paul Chiasson

Toys "R" Us's Canadian operations have found a safety net months after the retailer's demise in the U.S. and overseas.

Documents filed in a Richmond, Va. bankruptcy court on Monday revealed the retailer will be cancelling an auction for its 82 Canadian stores and seeking approval on Tuesday to sell them to Toronto-based Fairfax Financial Holdings Ltd., which is involved in property and casualty insurance and reinsurance and investment management.

The auction was triggered by a recent $300-million stalking horse offer Fairfax made that allowed others to make competing bids for the Canadian operations until Monday at 10 a.m. EST, but court filings showed no bidders other than Fairfax registered an offer.

Fairfax's successful bid signals an end to the uncertainty that has followed the beleaguered company's Canadian arm since September, when it filed for creditor protection and its U.S. division sought bankruptcy protection. The moves, said to be the product of heavy debt and the rising popularity of e-commerce and electronic-based toys, prompted disappointment from toy lovers and investors alike.

Among the most upset by the company's demise was Isaac Larian, the executive behind California-based, Little Tikes- and L.O.L Surprise!-maker MGA Entertainment Inc.

He and investors he refused to identify made a bid for the retailer's Canadian operations, which are run separate from its U.S. dealings, outside of the now-cancelled auction in March, calling Toys "R" Us's Canadian arm a "good business."

"They run it efficiently, and have good leadership," he said. "At the right price, it makes economical sense."

When rumours suggesting Larian's bid had been rejected started circulating last week, he at first said it was "disappointing," but as more details about Fairfax's bid emerged, he appeared to have taken on a new outlook.

"As long as Toys "R" Us and jobs are saved, I'm happy. That's what .SaveToysRUs was and is about," Larian said in a statement.

"In regards to Toys "R" Us USA, the fight to save it is just beginning."

For Larian, that fight has largely centred on a crowdfunding campaign he launched on Mar. 21 in hopes of raising $1 billion to salvage the business' 70-year-old U.S. operations.

He chipped in $200 million himself, but as of Monday at noon, had only raised an additional $62,000 from 2,043 toy lovers. The donors were being enticed to give with promises of .SaveToysRUs bumper stickers, special edition toys, invites to a reopening block party and opportunities to tour the oldest toy factory currently operating in the U.S. depending on the amount they give.

Larian also vowed to give 10 per cent of proceeds from Little Tikes purchases made between the campaign's launch and its May 28 end date to the plot.

When the campaign launched, Toys "R" Us's bankruptcy documents showed Larian was facing plenty of competition. There were 20 interested parties vying for the U.S. business, which includes 740 stores.

Fairfax has not said whether it will vie for the U.S. operations, but the business, owned by billionaire Prem Watsa, has been on a recent spending spree.

In February, it acquired part of infrastructure services company Carillion Canada, which filed for bankruptcy protection in January, and in November, it increased its stake in Torstar media company, which holds an investment in The Canadian Press as part of a joint agreement with a subsidiary of the Globe and Mail and the parent company of Montreal's La Presse.