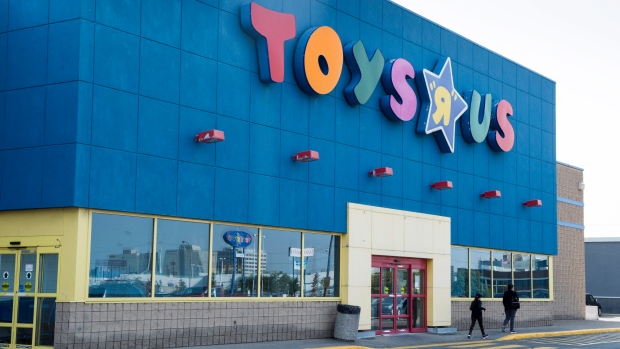 A Toys "R" Us store is seen Tuesday, September 19, 2017 in Montreal. Toys "R" Us has filed for bankruptcy protection in the United States and says it intends to follow suit in Canada. , THE CANADIAN PRESS/Paul Chiasson

Now Product Launchers, which supplies other novelty items like squishies from five toymakers to Toy "R" Us, expects it will not be paid for the $500,000 fidget spinner order and other items following the chain's Chapter 11 bankruptcy filing on Sept. 19, Product Launchers Chief Executive Linda Parry Murphy told Reuters.

"These toymakers were very reliant on Toys 'R' Us. It's their primary account, or the account that they were leaning on to make inroads in the toy industry, looking at the long term down the road," Parry Murphy said.

"But we've made a decision not to sell to Toys moving forward."

Meanwhile Barbie maker Mattel Inc (MAT.O), toy and board game company Hasbro Inc (HAS.O) and other large vendors like Lego could get full payment after Toys "R" Us asked a bankruptcy judge to approve US$325 million of special financing to pay top suppliers owed before the Chapter 11 filing.

The unequal vendor treatment is not unusual in a Chapter 11 bankruptcy, but it shows the tough decisions vendors face when retailers file for bankruptcy, as dozens have in recent years, succumbing to competition on price and convenience from Amazon.com Inc (AMZN.O).

The beneficiaries of the financing package are still unknown, but smaller vendors like Product Launchers do not expect to make the list. Its claim tops US$1 million but the amount is well below the US$2.5 million to US$135 million listed as Toys "R" Us' 50 largest claims.

Toy "R" Us declined to comment on specifics about its relationship with Product Launchers or its other vendors.

Toys "R" Us spokeswoman Nicole Hayes said in an email, "So far, we have seen great support from our vendors and look forward to continuing working with them for many years to come."

She said the company will rely on US$2 billion in new financing to fund operations.

Hundreds of vendors have faced similar concerns in their dealings with bankrupt retailers such as Sports Authority and hhgregg, which ended up going out of business. Toys "R" Us is an extraordinary case, retail consultants said, because of the large number of toy vendors it relies on to fill its big-box stores.

"We've taken down all connections to them," said Parry Murphy. "I would rather focus on retailers that have strong financials and that we have a good comfort level about doing long-term business with."

At this point, she thinks Toys "R" Us is too far behind the curve to catch up with deep-pocketed competitors like Amazon and Wal-Mart Stores Inc (WMT.N).

The loss of Product Launchers and other vendors, coming on the verge of the holiday season when Toys "R" Us generates about 40 per cent of annual sales, shows one of the risks facing the big toy retailer during bankruptcy.

If consumers discover the chain is not stocking a hot seasonal item, they will not visit its stores or website, Toys "R" Us said in court filings.

Toys "R" Us relies on hundreds of small vendors to give its stores the appearance of plenty.

"Your store won't be attractive with just Mattel and Lego," said Israel Shaked of the Michel-Shaked Group consultancy.

Retail specialists agreed that the 2017 holiday season could determine the fate of many brick-and-mortar retailers that have struggled to remain relevant in a growing era of e-commerce.

"This holiday season will be a true litmus test for the in-store experience," said bankruptcy lawyer Corali Lopez-Castro. "The products have to be exciting and worthy of visiting the store or online. But really you want people in the store. That's where they can pick up the widget, the Lego, and the Barbie."

Toys "R" Us' success in retaining vendors likely will hinge on confidence in its turnaround plan, dubbed "Project Sunrise," which envisions improved and integrated online and in-store shopping experiences.

"The potential upside is massive," Araten said, adding that Toys "R" Us would emerge from bankruptcy a "nimbler and stronger company that delights kids for generations."