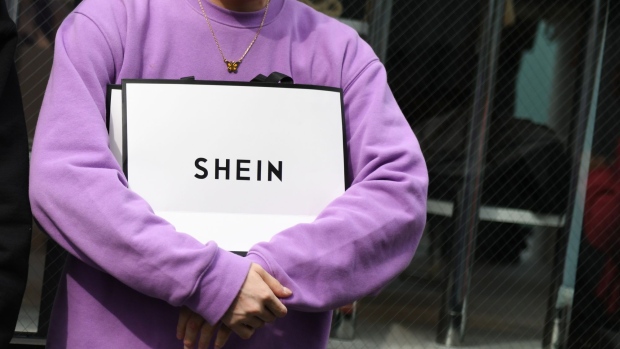 A customer holds a Shein bag outside the Shein Tokyo showroom in Tokyo, Japan, on Sunday, Nov. 13, 2022. Fast fashion retailer Shein opened its first permanent store in the world in the Harajuku district of Tokyo on Sunday, Nov. 13. Photographer: Noriko Hayashi/Bloomberg , Bloomberg

(Bloomberg) -- Hidden Hill Capital, a private equity firm backed by GLP Pte., has raised $465 million for a fund targeting the infrastructure for a generation of Chinese companies like Shein that are turning outward for growth.

The Hidden Hill Foundation Fund has started out with shares in six companies including J&T Express Co. and JD.com Inc. unit JD Logistics Inc., which its operator previously invested in. NewQuest Capital Partners, owned by the alternative asset manager TPG Inc., is the fund’s lead investor alongside backers from North America, Asia and Europe, Hidden Hill said in a statement Friday.

Hidden Hill joins investors betting that Chinese firms will increasingly look abroad for growth. It aims to invest in the ecosystem that will support those future global giants, from technology services to the raw logistical support they will need to move goods around the world.

China’s giant tech sector is accelerating its international push after grappling with a double-whammy of regulatory crackdowns and economic malaise at home. Emerging from the transition are a new crop of upstarts like Shein, which leverages China’s fast and cheap labor to sell clothing to US customers.

Hidden Hill, whose portfolio firms provide technology and platforms for such China-based but international businesses, wants a slice of that action at a time the world is fretting over the fracture of global supply chains.

“We see the opportunity where, with China at its center, Asia will develop a unified supply chain to service the global market,” Higashi Michihiro, GLP’s China chief strategy officer and Hidden Hill’s founding partner, said in an interview. “Asia will have its own UPS in the future.”

Established in 2018 with offices in Shanghai and Hong Kong, Hidden Hill manages over $3.6 billion of assets across five yuan-denominated funds and two US dollar funds, it said, focusing on supply chain digitization and renewable energy. It has made bets on the logistics arms of China Eastern Airlines Corp. and China Southern Airlines Co., as well as startups like freight software developer G7 and sorting robots maker Libiao Robotics. Its main backer GLP has about $115 billion of assets under management, it said in a statement.

One of its latest investments is in Jet Commerce, which offers consulting, marketing and logistics services for brands and ecommerce platforms like TikTok and Sea Ltd.’s Shopee. In August, the Hangzhou startup said it raised $60 million from investors including Hidden Hill and ByteDance Ltd.-backed Jinqiu Capital, without disclosing its valuation. Another Hidden Hill investee, ZongTeng Group, is a key logistics partner to ByteDance and Shein.

Venture capital investments in China are falling sharply this year, as investors sour on money-losing tech startups and publicly traded stocks tumble. Growing tensions between the US and China have driven investors to look at regional clusters like Southeast Asia. China-focused private capital fundraising has plunged 81% to $21.5 billion so far this year, down from $115.9 billion in 2021, according to data tracker Preqin.

“We always have an exit plan in mind for our investors,” said Richard Dong, another founding partner at Hidden Hill. “The point of bringing Chinese firms overseas is not only about giving them a new revenue stream, it’s also about offering our LPs another window to exit under the current macro environment.”

(Updates with fundraising data from the ninth paragraph. A previous version of the story corrected an exec’s title.)