Inflows to emerging-market stock and bond exchange-traded funds accelerated as the U.S. and China finally agreed on a phase-one trade deal.

Some US$1.15 billion was added to U.S.-listed emerging market ETFs that invest across developing nations as well as those that target specific countries in the week ended Dec. 13, more than eight times the US$141.9 million inflow in the previous week, according to data compiled by Bloomberg. It was the tenth straight week of inflows, the longest streak in a year.

Flows were led by the three biggest emerging-market equities ETFs rather than country-specific funds, signaling investor optimism on the asset class. The US$28.7 billion iShares MSCI Emerging Markets ETF, known as EEM, received US$533 million and the US$66 billion Vanguard FTSE Emerging Markets ETF, known as VWO, got US$352 million, both the biggest amounts since February. 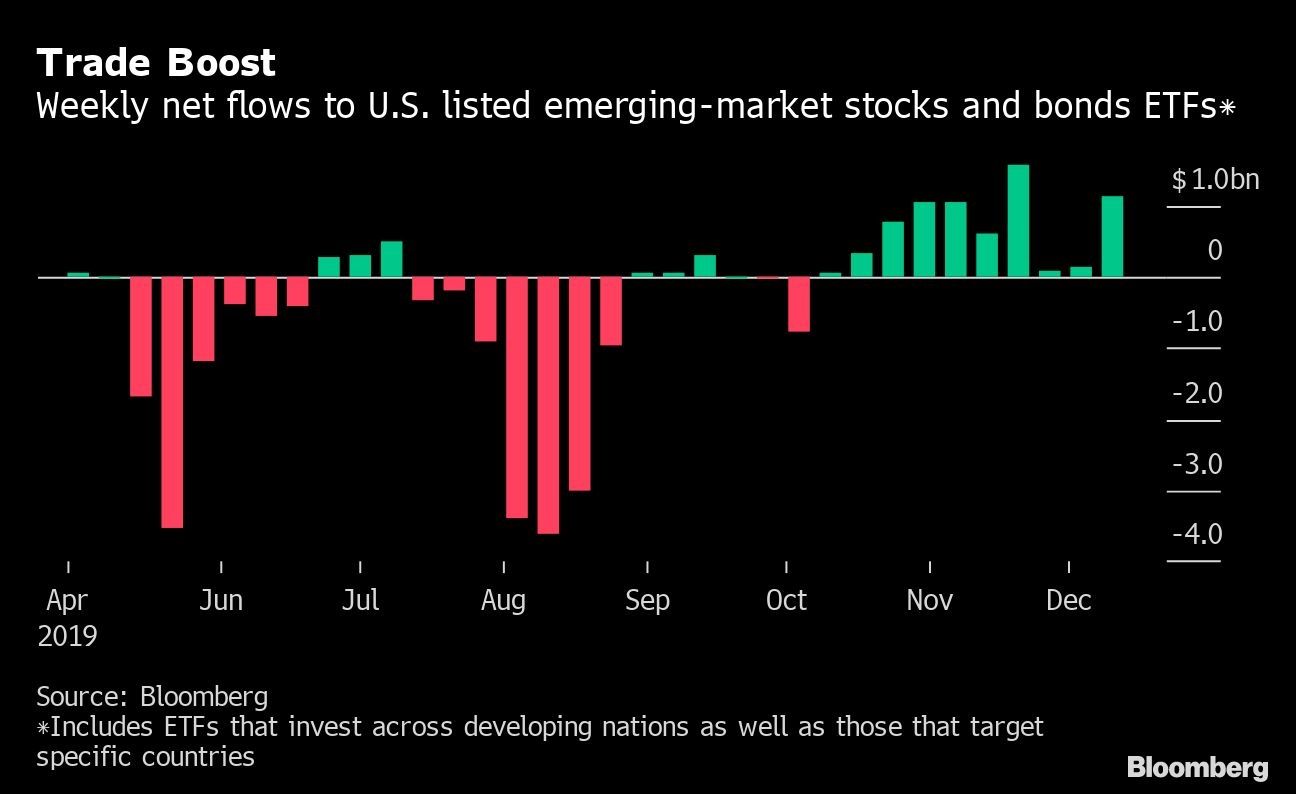 Meanwhile, the US$14.9 billion iShares JP Morgan USD Emerging Markets Bond ETF, known as EMB, had a small inflow of US$45 million. So far this year, inflows to stocks and bond ETFs have totalled US$6.81 billion.

Emerging-market assets rallied last week on optimism the world’s two largest economies would reach a deal to avert the imposition of new U.S. tariffs on Chinese goods on Dec. 15. After some mixed messages that whipsawed markets, the two countries ultimately reached an agreement, lifting appetite for riskier assets.

• Stock ETFs expanded by US$1.21 billion.
• Bond funds fell by US$52.4 million.
• Total assets rose to US$274 billion from US$265.3 billion.
• The MSCI Emerging Markets Index closed up 3.6 per cent from the previous week at 1,086.91 points, the highest level since April 23, 2019.
• China/Hong Kong had the biggest inflow, of US$340.6 million, led by iShares MSCI Emerging Markets.
• Colombia had the biggest outflow, of US$4.27 million, following withdrawals from the VanEck Vectors J.P. Morgan EM Local Currency Bond.