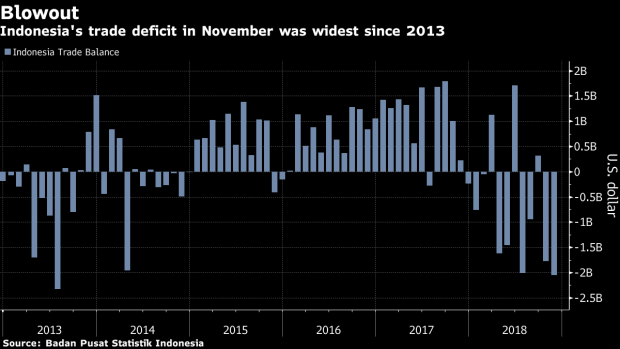 Fishermen unload a crate of freshly caught fish from a fishing boat at the Muara Angke port in Jakarta, Indonesia, on Tuesday, Sept. 27, 2016. Indonesia's central bank has loosened monetary policy this year to help spur an economy that's growing well below the 7 percent target set by President Joko Widodo when he took office two years ago. Photographer: Dimas Ardian/Bloomberg , Bloomberg

(Bloomberg) -- The U.S.-China trade war is beneficial to Indonesia as it could lead to a shift in production to other countries in the region, according to Vice-President Jusuf Kalla.

“Ongoing trade war is quite good,” Kalla said at a discussion on economic outlook in Jakarta on Tuesday.

His comments are in contrast to those from other Indonesian officials, who have warned of the negative spillover effects from higher U.S. tariffs on China, including the possibility of China dumping cheap products, like steel, in neighboring markets.

Southeast Asia is seen a potential beneficiary from the trade war, especially low-cost locations like Vietnam. Indonesia, with its restrictions on foreign investment and poor infrastructure, is less of a drawcard for businesses.

Indonesia’s trade deficit ballooned to a five-year high of $2.1 billion in November as imports continued to outpace exports. There are signs the U.S. and China may reach a deal to resolve the trade dispute that’s resulted in the two countries imposing tariffs on a combined $360 billion in each others’ imports.

--With assistance from Karlis Salna.